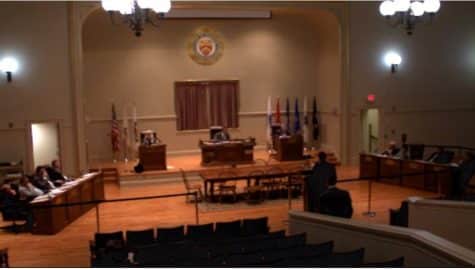 WARWICK, RI — Indications of a division between Mayor Joseph Solomon and City Council President Steve Merolla came to a head on Monday night, with Merolla accusing Solomon of wanting a dictatorship because the mayor has not submitted a city solicitor for the council’s approval.

During a heated exchange with city Chief of Staff William DePasquale, Merolla repeatedly asked when Solomon would be submitting a name for the council’s approval.

When DePasquale refused to answer the question directly, Merolla said: “Maybe we should just become a dictatorship, and we don’t have to follow the charter at all.”

Merolla’s decision to ratchet up his language against former council colleague Solomon did not happen in a vacuum; after what looked like a united start to Solomon’s election as mayor, a division soon formed between each man’s perspective on city finances.

And as this spring’s school funding controversy erupted, Merolla and Solomon were nowhere near unanimous in how to deal with the issue. Both offered proposals that had major deficiencies (Merolla’s offer of $1.3 million with strings attached and Solomon’s demand that the school department use pension funds to balance its budget were both legally questionable), and both tripped over themselves in trying to spin the result as anything other than a total failure of their tactics.

It was also no secret that Solomon had other plans for the city solicitor position; a WarwickPost commentary in June noted how Solomon could have used a professional opinion on the school pension fund proposal, and WarwickPost coverage noted how Solomon boosted the city’s legal account by $600,000, then removing it from the budget to give additional money to the schools.

Later, Solomon hired consultant Micheal D’Amico to work on financial and contract issues at a cost of $4,000 per month.

Given that background, it’s hardly surprising that Solomon appears to be going his own way on the solicitor issue.

DePasquale didn’t seem to have an adequate answer for Merolla, although one of his replies could indicate the mayor’s tactic on the issue: “The charter doesn’t preclude a special service from being rendered. The charter does not preclude the mayor of this fine city [from] hiring a professional.”

His use of that term — “special service” — seems invented to give the mayor far more influence over hiring in the legal department than the charter provides.

(The charter doesn’t include the phrase “special service” with reference to any of the mayor’s decision-making powers.)

Warwick City Charter Article VIII Chapter 4 states, as Merolla noted Monday night: “There shall be a law department, the head of which shall be the city solicitor who shall be appointed by the mayor with the advice and consent of the city council.”

The “Law Department” section of the charter also explains that “The city solicitor shall be attorney for the city and legal advisor of the council if requested, and of all officers, departments and agencies,” and “shall perform such other duties as may be prescribed by the council.”

That’s pretty much what ‘dictator’ means

While arguably inflammatory, Merolla’s use of the term “dictatorship” is not entirely wrong.

From his statements on Monday night, it’s clear that Merolla is suggesting that Solomon wants control of the city’s legal department to be under his sole authority.

Stopping a duly-elected legislature from meeting its requirements under the law is essentially a textbook definition of “dictatorship.”

And at a time when the U.S. President is threatening the separation of powers in the Constitution by refusing to allow government officials to testify in Congressional hearings, and a late former Providence mayor is being celebrated on stage in part for his single-minded governing style, the last thing Warwick needs is another example of executive branch overreach.

Conclusion: Solomon should follow the charter and submit a city solicitor for council approval. Anything less is a blatant power-grab that underscores the ongoing rift between the mayor and council, and threatens to derail any progress toward managing the city responsibly.