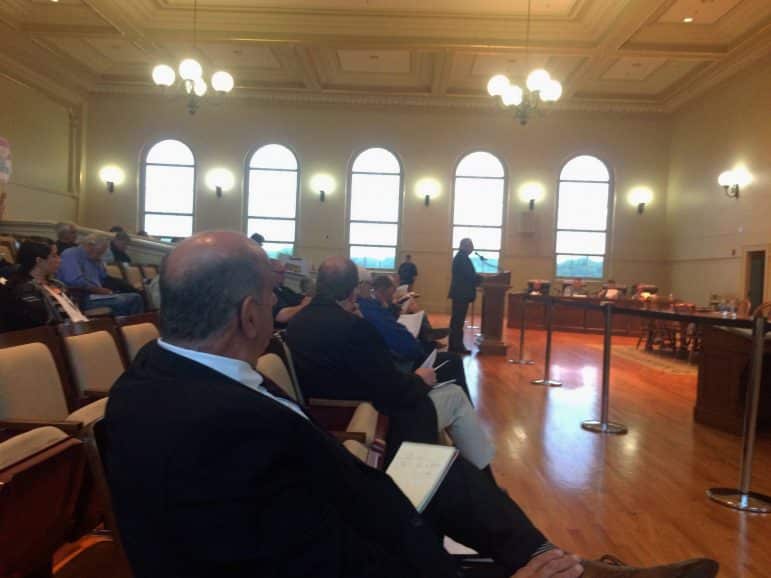 WARWICK, R.I. — The School Department’s above-minimum pension payments are in the past, where they’re likely to stay despite a plan to use the $4 million to balance the FY19 budget, which an attorney notes jeopardizes the fund’s tax exempt status.

School Committee Chairwoman Karen Bachus pointed out the misnomer of the term, “overpayment,” for the pension fund contributions, while addressing the Council during the hearing. The contributions have resulted in a pension fund that is not quite fully funded, at about 94 percent.

“No pension is over-funded unless it’s funded by (more than) 100 percent,” Bachus said. Also, she said, using the pension fund for anything else will incur dire penalties from the IRS.

Bachus was equipped with a four-page letter from Cory J. Bilodeau, tax attorney with McLaughlin Quinn in Boston, MA. In the letter, Bilodeau said using the fund for any purpose other than paying pension benefits is prohibited by federal law.

Using $4 million from the School pension plan to balance last year’s budget, agreed to under a May 1 decision reached with mediator Vincent Ragosta, may jeopardize the fund’s tax exempt status, Bilodeau said in his May 24 letter. Withdrawing money from the pension for that reason violates federal law and will incur penalties from the IRS, at that agency’s discretion, including the possible loss of the fund’s tax exempt status, he said.

Using the fund to balance last year’s budget was the solution mediator Vincent Ragosta helped reach to resolve a Caruolo Act lawsuit claiming insufficient funding by the Warwick School Department against the City of Warwick, theoretically repurposing an estimated $4.1 million the Schools paid in excess of actuarial recommendations for the plan from 2014-2019.

Mary Townsend, Warwick School Pension Committee member and president of W.I.S.E Local 357 Council 94, disagreed with the planned use of the funds.

“I think the pension should be used to pay members (pensions),” Townsend said.

The decision assumed that the withdrawal was legally permissible and carried no penalty, assumptions Bilodeau dismissed in his opinion.

First, Bilodeau said, such a withdrawal is not permitted under federal law governing pension funds, specifically, the “exclusive benefit rule,” which prohibits diversion from a pension fund for any purpose other than providing pension benefits. By violating that rule, he said, the city risks the IRS disqualifying the plan’s tax exempt status under federal Code 401.

“If the trust becomes taxable, it would then pay tax on its investment earnings in each year during which the Plan remained qualified,” Bilodeau wrote.

Although the pension can’t be used to balance the FY19 budget, the Caruolo Act lawsuit won’t be returning, Bachus said.

“It’s binding arbitration,” Bachus explained of their agreement to drop the lawsuit. Now, “We have to find a way to balance it for this year,” she said, “but it’s not going to come from the city.”

“We have asked if they would go back into mediation,” said Aubrey L. Lombardo, partner with Henneous Carroll Lombardo LLC, the School Department’s attorney. She said they have not heard back from the city in reply to their request.

Bachus said part of the $4 million will come from $1.7 million the schools owe the city in bond interest payments. Mayor Joseph J. Solomon proposed relieving the Schools of their obligation to make the payments, but Bachus said that’s immaterial.

“We’re not going to pay that. We don’t have it,” Bachus said.

During the presentation, Council President Steve Merolla asked about Bilodeau’s letter, presented to the Council at the meeting. He asked about Ferrucci’s statement that there had been no penalty incurred from past uses of the pension fund.

Ferrucci replied that he had been responding to a question about whether a withdrawal would incur fees, which he said he answered, ‘No,’ accurately. He also stated that he is not a tax attorney and couldn’t have offered an expert opinion on the question.

Councilman Ed Ladouceur also pressed Ferrucci about his statement about the pension fund during the mediation, stating that Solomon had asked him twice if there had been any tax penalties associated with earlier withdrawals from the pension fund.

“And twice you said, ‘no,’ Ladouceur said.

Ferrucci replied that Ladouceur misunderstood his answer at the time.

“It is not my understanding. It is what you stated,” Ladouceur said.

Councilman Jeremy Rix asked Ferrucci why the pension payments were made at $1.8 million in excess of the $1.2 million the actuaries advised during those years, while the school department struggled to keep programs in their budget.

Ferrucci replied that he did not consider altering the amounts paid into the pension funds during those years as a possible cost savings opportunity. Rather, he said, he had been attempting to plan for a possible change in mortality tables actuaries had warned him about that would require increased payments in the future, which he was attempting to gird the fund against.

Bilodeau’s letter points out that Ragosta noted in the agreement he was not charged with determining the legality of a pension fund withdrawal. Bilodeau-letter-pension-withdrawal-legality