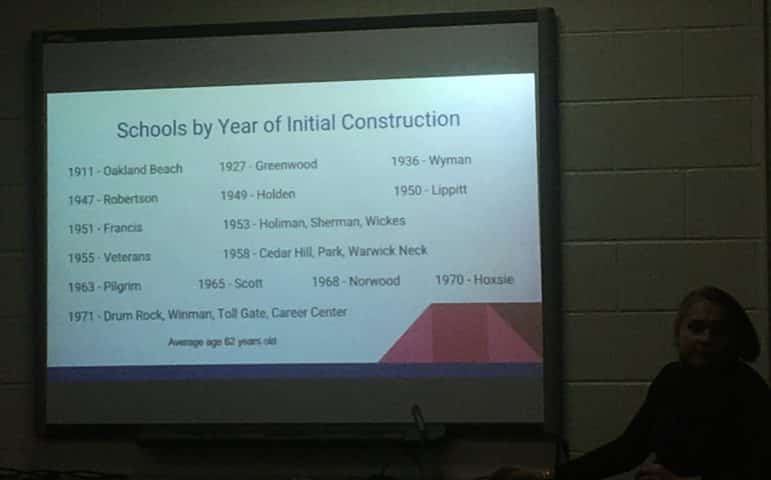 Editor’s note: An earlier version of this story erroneously reported upgrades to 290 classrooms as part of the sixth-grade move. That reference has been removed from the story. Warwick Post regrets the error.

WARWICK, RI — The $3 million cost of moving sixth graders into Warwick Schools’ junior high schools and converting them to middle schools, originally planned to be offset by the simultaneous closing of elementary schools, will come from the operational budget, assuming the Warwick School Committee decides to proceed.

The Warwick School Committee voted to delay the elementary school consolidation by one year in October, on the recommendation of the School Consolidation Committee and Mayor Scott Avedisian, in response to public calls to slow the consolidation process to address concerns of students, staff and faculty.

“By not closing the buildings next year, there’s no savings to offset against the (sixth-grade) move,” said School Committee member David Testa.

During Tuesday’s meeting, the School Committee will consider proceeding with the move, which may face challenges in addition to funding, Testa said.

WARWICK, RI — The next step in the Warwick School Department’s school consolidation plan — moving the sixth graders into Warwick Veterans Jr. High and Winman Jr. High, converting them to middle schools — will cost $3 million, the expenditure of which will be discussed during Tuesday’s School Committee meeting.

The timing of the move depends on the funding, as well as whether other schools would be closed,Thornton said during Thursday’s meeting of the Parent Communication Advisory Committee [PCAC] – a sub-committee of the Warwick School Committee.

Mark Comtois, PCAC chairman, asked about how these proposals would be communicated to the students and their parents, including plans for fifth grade transition to middle school.

“The two principals of the middle schools are planning visits to their ‘feeder elementaries.’ We asked them to wait until we had clarification from the school committee after this Feb. 7 meeting, because we didn’t want to be talking about this move if in fact it was going to be delayed,” said Cheryl Rabbit, Chief Academic Officer for Warwick Public Schools.

“Depending on whatever the direction that the school committee takes, we’re primed to move, we have our recommendations,” she said. A ‘staggered start’ is one option under consideration, with the incoming sixth graders starting a day before the seventh and eighth graders.

A grant proposal has been submitted to the Rhode Island Foundation to fund a two week introduction in August for incoming students that would highlight the “life of the middle-schooler,” during which time the students would receive Chromebook laptops.

Some parents expressed concern that graduation ceremonies from the elementary schools had already been planned, and may have to be canceled. Others asked if the sixth-graders would attend in areas of the schools separated from the seventh- and eighth-graders.

At Tuesday’s Committee meeting, Thornton will also request $6,000 for a Department of Health-approved engineer to test the indoor air quality of Warwick Vets Jr. High, and also an emergency expenditure of $9,000 to repair three motors in the school’s basement used to circulate air, a negative pressure system.

The outstanding air quality issue is one of many infrastructure challenges in need of attention. Thornton said the department’s architect reports they’d need $255 million to take care of all the facilities’ repairs. Thornton will only ask for a bond for part of that during Monday’s City Council meeting with resolution PCR-23-17.

“The bond request for the council to consider is $85 million – if they were approve that or some piece of that, it would go to the Statehouse and the voters in the following Fall,” said Thornton.

“They said Vets would need $30 million in the first five years, and Pilgrim needs $40 million – they think Pilgrim is worse off,” Thornton said.

According to RIDE’s index, any school scoring below 70 percent should be replaced, considered beyond repair, said Ferrucci. He said one of Warwick’s elementary schools – which he did not name – fell under this score, in a report that has been embargoed. “They are not ready to release the report,” Ferrucci said.

“We’ve done the down-sizing, now we have to fix what we have,” he added. He said he would like to plan some public forums to show the need and describe the priorities of projects.

The next scheduled meeting of the PCAC is set for Thursday, March 2, at 7 p.m., and is open to the public. An agenda will be available at the Secretary of State’s website. Information is also available on the PCAC’s FaceBook page, www.facebook.com/WPSParentCommittee.