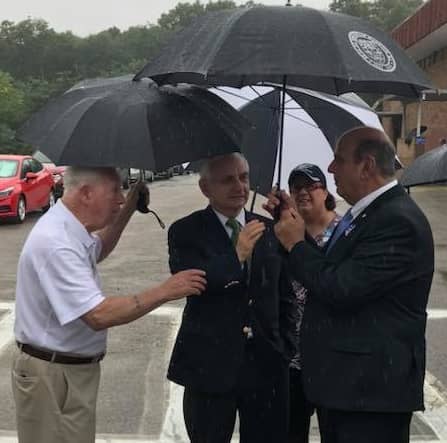 WARWICK, RI — Joseph J. Solomon Sr. emerged as the victor of today’s four-way Democratic primary for Warwick Mayor, defeating Richard Corrente by a 65-to-18 percent margin with 96 percent of precints reporting, according to the unofficial vote count published by the Rhode Island Board of Elections at 9:50 p.m.

Gerald Carbone finished with roughly 15 percent of the vote. Vincent Ferla, who had dropped out of the race due to ongoing health concerns according to the Warwick Beacon, collected 2 percent.

Solomon will face Republican challenger Sue Stenhouse in the general election on Nov. 6.

Anthony Sinapi appeared to win the race for Ward 8, taking 503, or 54.8 percent of the votes over former School Committee chairwoman Bethany Furtado, who collected 415 votes, or 45.2 percent. With the win, Sinapi would essentially secure the seat, as there are no other candidates running for the post previously held by Joseph Gallucci.

Sinapi said Wednesday night that he would await the results of provisional and absentee ballots before making any announcement.

On the Republican ticket, Michael Underwood defeated Ronald Loparto in the House District 21 primary and will face incumbent Camille Vella-Wilkinson in November.

And in the House District 26 race, Jackson retook a one-vote lead over DiMasi in Warwick after all precincts reported. DiMasi still held a slight lead in the West Warwick portion of the district, 293 to 288.