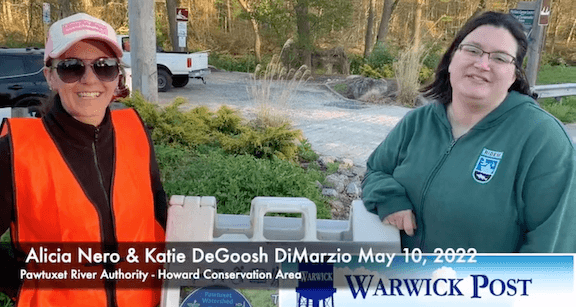 WARWICK, RI — The Pawtuxet River Authority and Watershed Council (PRAWC)  tour of the he Howard Conservation Area May 10 showcased sights and history of the newly acquired parcel, including a catalog of invasive species the PRAWC is working to eliminate.

The PRA owns the 50-acre parcel spanning the cities of Cranston and Warwick along the Mainstem Pawtuxet River, with public access available from Knight Street, adjacent  to  the Pontiac Canoe Launch.

According to the PRWAC, the land was, “formerly an ill-maintained expanse of illegal trash dumping, and abuts the former Cranston Sanitary Landfill which has undergone extensive environmental remediation.  PRAWC has been steadily working to make this area a functional urban passive recreation facility as well as a wildlife refuge by combating illegal dumping, eliminating invasive plant species, encouraging native plant growth, and maintaining a former state institution historic cemetery.”

PRWAC volunteer Doug Wilson pointed out patches of Autumn Olive, invasive vines, Mile a Minute, and Stinging Nettle, all invasive species he and his fellow volunteers are fighting to control on the property. Despite the plants’ ability to out-compete local plants, robbing local animals such as deer of their food, one diid have a redeeming quality for humans. Wilson pointed out that one of the plants is more nutritious than spinach — to humans.