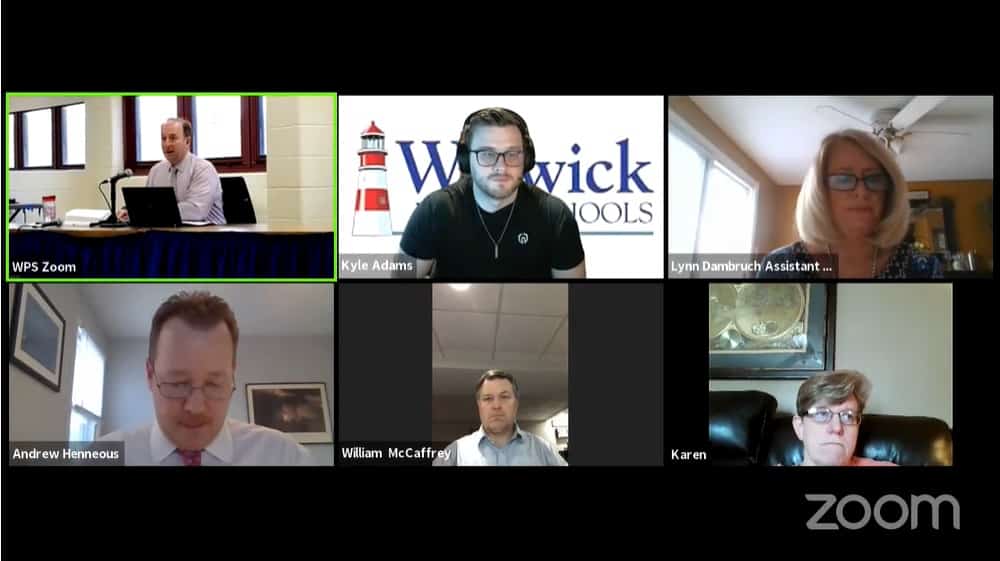 WARWICK, RI — All Warwick schools would remain open, school busses would return to full capacity, and student programs would remain intact under the proposed FY22 budget reviewed by the Warwick School Committee on April 14.

Committee members also discussed a plan to address an estimated $7.5 million deficit in the new budget through up to 34 teacher layoffs, which school administrators explained would bring staffing levels in line with the district’s declining student enrollment, and result in a budget that does not require additional funding from the city above the current $171.5 million contribution.

Testa also explained that communities can reduce their contributions to schools because of a reduction in student attendance, ‘and we have that — we have that in spades.’

During the budget hearing Wednesday night, Operations and Finance Director David Baxter outlined $24.8 million in non-staffing items in the spending plan, representing about 14 percent of the total budget, and advocated that the committee approve them as proposed.

“We scoured and eliminated any redundancies, we focused on student achievement, and we trimmed and cut as much out of the budget in advance as we could, and what we couldn’t [cut] and what fit, we shifted to alternate sources of funding,” Baxter explained.

Following Baxter’s presentation, committee member David Testa said that “it’s self-evident how we balance this budget — asking the city for more money in this particular environment is not a good practice.”

Testa also explained that communities can reduce their contributions to schools because of a reduction in student attendance, “and we have that — we have that in spades.”

During a School Committee meeting the night before, Baxter reported that Warwick’s student population fell by more than 2,000 between 2010 and 2020. According to the Rhode Island Department of Education, Warwick had an enrollment of 8,140 as of Oct. 1, 2020, compared to 10,261 students in 2010.

Baxter added that school officials anticipate a drop of another 120 students in the upcoming school year.

Based on those statistics, Testa voiced his support for reducing the budget through layoffs and other efficiencies, instead of cutting student programs.

“If we take away from students to keep staff, it’s an upside-down world,” said Testa, who called the prospect of layoffs “unpleasant, but it’s a reality.”

Baxter and Supt. Philip Thornton reassured the board that their proposed budget maintains educational services while also reducing discretionary costs elsewhere, such as leasing school maintenance vehicles instead of purchasing them.

“This budget does not impact any programs that we run for students,” Baxter explained.

To a question from committee member Karen Bacchus about whether the district is “right-sized,” Thornton responded that school administrators “would not forecast any closures,” and explained that, though most of the district’s loss in attendance has been at the middle and high schools, he expects the current two middle and two high schools to remain open.

“I don’t see that changing any time soon,” said Thornton.

Chairwoman Judith Cobden then noted that 158 families opted for homeschooling during the 2020-21 school year, and asked whether their return could throw off the administrators’ budget forecast.

“What happens when they say ‘We’re sending our kids back,’ so we have to recall those teachers and our budget is out of balance — what do we do?” asked Cobden.

Thornton explained that “the numbers [of students] you have now in the system don’t jibe with our staffing load,” and reminded the committee that if they don’t notify teachers of their potential layoffs by June 1, “you’ve lost the opportunity for that upcoming school year.”

But while she acknowledged the urgency to make a decision about layoffs, Cobden still voiced concern about possible changes in enrollment.

“What happens in August when these people show up?” she asked.

Baxter said that he and his team “left a substantial amount of margin and flexibility” in their staffing plans.

“We’re not cutting to the bone — if we followed the [enrollment] trend, we’d be eliminating 70 to 80 FTEs [full time employees],” Baxter explained. “We’re only proposing to reduce 34 [positions] and we’re still leaving plenty of capacity for our schools to accommodate an increase in enrollment.”

Thornton pointed to the administrative team’s discussion about cutting two classroom teams at one of the middle schools, noting that even with the reduction, the school would be within contractual limits for classroom population — but in the end, he proposed eliminating one classroom team because “the margin was so tight that the team didn’t think that was a wise move.”

Committee member Kyle Adams asked whether the committee could issue 34 layoffs, since past contracts have limited that number to 20.

“In the [current teacher] contract, we can go above 20 if we have a substantial decline in student enrollment, and that’s what we have here,” replied Thornton. | Read: Which Side ‘Won’ the Warwick Teachers Contract Battle?

Buses expected to be full in September

Cobden also shared her concern about what could happen with bussing if the district’s enrollment increases unexpectedly.

“We’ve got a very valid budget here to accommodate that growth, should it occur,” Baxter replied.

“This change that we were forced to do [because of COVID] has put a big struggle in a lot of our families’ lives, and it’s making it very difficult, especially for the little ones, to get to school safely,” said Cobden.

Baxter explained that “COVID has allowed us to start with a clean slate,” and described how an “all-new transportation team” is working on a bussing plan that they could recommend as early as June.

When Adams asked about teacher/student ratios in classrooms — currently 17 students to each teacher — Thornton replied: “Our expectation is to model a regular classroom setting [with higher numbers of students] in the fall. We have every indication to believe that is where we’re going.”

The school committee is next scheduled to meet on April 20 to discuss the FY22 budget.