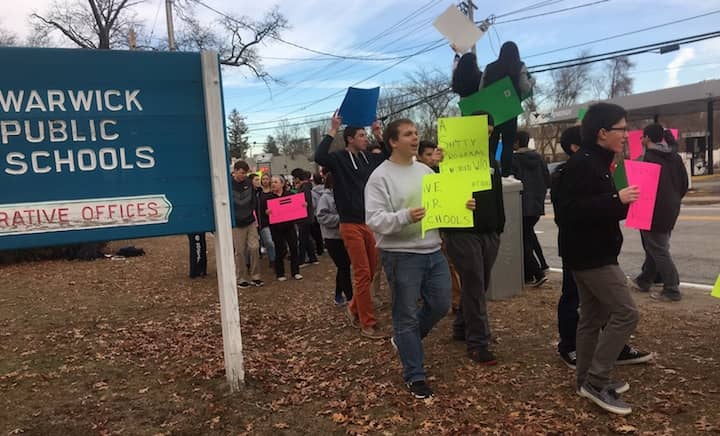 WARWICK, RI — With the recent release of the 2017-20 Warwick teachers contract [along with the online posting of the 2015-17 pact

that covered the years without a contract in place], the results of two acrimonious years can now be reviewed.

Ultimately, the key question is: Which side — the school committee or the teachers union — got more of what it wanted in the new contract?

The saga of the current contract started in 2015, when then-Supt. Richard D’Agostino announced his retirement following the release of the so-called Ragosta Report, which described Atty. Vincent Ragosta’s findings that D’Agostino and two other administrators actively covered up allegations that former teacher Mario Atoyan had improper contact with two students until a third student’s complaint made the TV news.

[One of the administrators, Rosemary Healey, won a New England Muzzle Award for her lawyer’s threat to sue the Warwick Post if it published the Ragosta Report.]

In the wake of D’Agostino’s retirement, the 2012-15 contract between the Warwick Teachers Union and the school committee expired. Supt. Philip Thornton took the top post at the district in September 2015, bringing with him a reputation for weathering PR storms to grind out concessions from teacher unions.

That reputation continued in Thornton’s new job, amid early attempts to negotiate a new deal.

In one case, Thornton defended the decision of the school committee to walk out of an April 2016 mediation session where union officials reportedly called for 10-percent salary hikes over three years. Ragosta confirmed at the time that “those were the words that were spoken,” and said that without the union putting the proposal in writing, confusion resulted.

Tensions between the school committee and union simmered through 2016, with on-again, off-again mediation and the added wrinkle of arbitration, where a three-member panel heard each side’s case and deliberated over the final form of an agreement.

Further complicating the situation was the decision by the school committee to announce the layoffs of 31 teachers in early 2017, above the limit of 20 that had been set in the expired contract.

The resulting dispute over those layoffs included a Rhode Island Labor Relations Board decision in the union’s favor that would have limited the number of layoffs to 20 as provided under the old contract, and a later Superior Court judgment that reversed the NLRB’s ruling and allowed the school committee to layoff more than 20.

Over the spring and summer of 2017, the union took to picketing City Hall with taunts of “Doctor Phil” and calling on Mayor Scott Avedisian to help get a new contract finished.

In the meantime, the school committee approved a mediated contract in July 2017, which the union later rejected.

The union then appealed to the General Assembly, long considered a union-friendly venue, to keep the limit on layoffs that the old contract included.

One problem was, however, that the so-called evergreen contract bill sponsored by Rep. Camille Vella-Wilkinson excluded layoffs from the contract terms that could be kept in place — meaning that the school committee still would be able to lay off more than 20 teachers.

With House Speaker Nicholas Mattiello’s decision not to allow a vote on overriding Gov. Gina Raimondo’s veto of the bill, any hopes of a state rescue for the WTU evaporated.

Thornton also engaged in hardball tactics, including an October 2017 email telling parents about a suspected teacher sick-out and sarcastically terming a similar maneuver a “virus” that apparently did not affect students.

“There’s no flu strain that just affects teachers,” Thornton said after the second mass absence of teachers, including 33 at Warwick Veterans Middle School.

Netcoh denied that teachers had coordinated the move, though it was later ruled an illegal strike by Superior Court Judge Susan McGuirl, who imposed a restraining order on the teachers preventing them from repeating the move.

After those losses, it seemed that it was only a matter of time before the parties agreed to a new contract, and they did in November 2017 — but still, not without some final drama.

On the night that the school committee approved the contract, school committee Chairwoman Bethany Furtado reportedly gave Netcoh a commitment in writing that the teachers would receive their increased pay on Dec. 21, but since the city council had not released $3 million it had set aside to pay for the new contract [blamed on Thornton’s inability to get it on a council docket in time], the money was not available.


Netcoh also announced that the union would not rescind an earlier no-confidence vote against Furtado and Thornton — but, given Netcoh’s estimate of 400 to 500 teachers backing the no-confidence measure and the nearly 900 full-time positions in the district, it remained an open question whether the WTU was as united as Netcoh seemed to be suggesting.

So, after all the wrangling — from contract negotiating rooms to court hearings to General Assembly votes to public protests — what, exactly, has each side won [or lost] in terms of concessions, compared to what they set out to accomplish?

It’s important to see just what each side wanted — and, in this case, there’s plenty of information available.

The school committee and Thornton posted a Teachers Contract Information webpage that included an outline of their stance on several issues, and updates from their perspective on the NLRB ruling and the adjournment of mediation in October, 2016. Netcoh and the WTU likewise published online newsletters and released statements to the media about their positions on these issues.

Here are how the sides lined up on the most contentious contract issues — and how they fare under the new pact.

Salaries: The school committee had offered no increase for 2015-16 and 3 percent raises in the each of the next three years. The WTU sought 3-percent raises for every year of the contract, in addition to retroactive pay raises.

Essentially, that’s a 4-percent difference between the two sides’ respective offers — instead of 6 percent for 2015-16 and 2016-17, the teachers got 2-percent raises for half of the second year.

Small as 4 percent may sound, it does represent a win for the school committee.

Sick time: Instead of the school committee’s target of reducing paid sick time to 18 days per year from the previous 90 [which Netcoh explained would actually cost a teacher money if they took off that much time], the new contract keeps the former language in place.

Give the win to the WTU in keeping sick time the same.

Coaching vacancies: Coaching positions were “open to regular classroom teachers only,” according to a clause in the expired contract.

On its teacher contract webpage, the school committee essentially called for eliminating that language, saying it wanted “athletic coaches annually appointed based on qualifications of candidate (best person for the job),” while the union replied that “The current contract language works well,” and accused Thornton of wanting “to open the appointment of coaches to favoritism and nepotism.”

The final language of the new contract allows outside candidates to be considered, with preference given to Warwick teachers if two applicants are found to be equal otherwise, and a written explanation given to a teacher if an outside applicant is chosen instead.

This is a toss-up, as the new contract ends the exclusivity clause like the school committee wanted, but gives preference to local teachers as the union sought.

Class size/weighting: Parent and student protests erupted in 2016 after the district reassigned special education students to classrooms that, under the old contract’s weighting system, would not have been allowed.

Weighting is the practice of counting one student as 1.5 or 2 in terms of class size, depending on their need for special education services.

The school committee sought to eliminate weighting, saying “Weighting students does not guarantee improved student services,” while Netcoh pointed to several instances where teachers and parents successfully challenged how students had been placed under the new system.

Under the new contract, weighting is eliminated in favor of new language that states “Special education classes at no time will exceed maximum established by law,” and a ratio system where no more than 30 percent of the students in a classroom can be special education students. The 30-percent limit will take effect in the 2018-19 school year.

This appears to be a loss for the union, which fought against including the ratio system in the new contract; as Netcoh wrote: “According to the superintendent, ‘No other district uses special education student weighting to calculate class size.’ What he fails to mention is that many other districts do use a ‘ratio’ system, which does not necessarily appear in a CBA, because other districts seem to do what is right for students without teachers having to put language in the contract to ensure educationally sound scheduling.”

Electronic grading: D’Agostino first implemented electronic grading in 2013, which led to the union going to the NLRB in 2014 and filing an unfair labor practice because of a lack of training on the new system. The NLRB ruled in favor of the union, but in 2016, the school committee went to court and won the right to require electronic grading — with the condition that it negotiate with the union about training.

The new contract does, indeed, include new language that provides four paid in-service training hours, held after school hours, for any teachers needing instruction on the electronic grading system.

This is another case where each side got what it wanted: Teachers are now required to record grades electronically, and the school department is providing training.

Layoffs: In the prior contract, the school committee could issue a maximum 40 layoff notices per year and lay off a maximum of 20 teachers.

This was the language that the union tried to preserve by going to the NLRB in 2016, only to lose in court in 2017.

Under the new contract, the school committee can exceed the limits if “there is a substantial decline in student enrollment,” or if it votes to close a school.

Of all the changes within the new contract, this represents probably the biggest loss for the union; the school committee now has the ability — and two specific criteria it can use — to issue more than 40 layoff notices a year and to reduce teaching staff by more than 20 in a given school year.

Teacher evaluations: The school committee sought to implement the Rhode Island Department of Education’s evaluation model instead of Warwick’s prior system, which is said was “neither approved by RIDE nor based on research.” In response, the union called the RIDE model “highly flawed and [it] prevents teachers from devoting a maximum amount of time
to their students.”

In the new contract, teacher evaluations follow the RIDE model, with three evaluation conference held during the school year, and performance improvement plans [PIPs] where needed.

This is another win for the school committee, as the new contract requires teachers to follow state evaluation standards and procedures for improving their performance if they receive poor evaluations.

In the two years since the last teachers contract expired, both sides treated the new pact as a zero-sum game — where any gains by one side were seen as a loss by the other.

Within this framework, it’s pretty clear that the school committee came out ahead, and that the union gave up significant ground on several fronts.

The school board secured significant changes to the contract — in class size, layoffs, and teacher evaluations — while agreeing to concessions in coaching and electronic grading.


And those concessions — in “preference” for local teachers instead of exclusivity when hiring coaches and in after-school paid training on the electronic report card system — are, arguably, minor when compared to what the union gave up in the other areas.

Even on the pay issue, the union lost some ground in failing to get anything more than a half-year of retroactive pay instead of two years at the 3 percent that it sought.

Conclusion: After all the sound and fury, the Warwick School Committee weakened the Warwick Teachers Union position in several major areas and gave up relatively little in return.