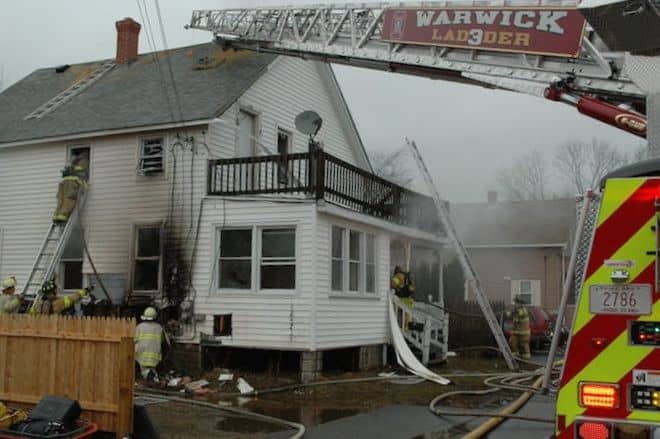 Warwick, RI — Warwick Firefighters had a vacant house fire at 39 Eaton Ave. at 7:50 a.m., under control within an hour and were pulling apart the walls looking for pockets of flame as smoke continued to drift out of the gutted dwelling at about 9:30 a.m.

The two-alarm fire drew nine engines including a Special Hazards truck and two ambulances, though no one was inside the home and none of the approximately 25 firefighters responding were injured fighting the fire.

Deputy Fire Chief Bruce Cooley said the fire began in the basement and, due to the building’s balloon-style construction, spread through every level of the house, up into the attic.

Part of the main floor was compromised by the flames and has collapsed, Cooley said. “This is extensively damaged,” he added.

The Warwick Building Inspector and Fire Marshal were called to inspect the building once firefighters confirm there are no more flames inside the walls, a routine hazard for older, balloon style construction homes, Cooley said.

Directly across the street, neighbors watched as firefighters tore siding off the home and hacked into the walls with an ax looking for flames that had escaped the morning’s initial efforts.

Sisters Brittany and Tatyana Waters were alerted to the fire by the arrival of fire engines and yelling outside, they said. Tatyana looked outside to see what was happening.

“And then I saw a whole bunch of flames,” she said.

They weren’t worried about anyone inside the house, she said, since the occupants had moved out earlier this month. That was fortunate for them — Tatyana said the flames reached into the front room where a woman and her 5-year-old girl would have been sleeping had they still been living there.