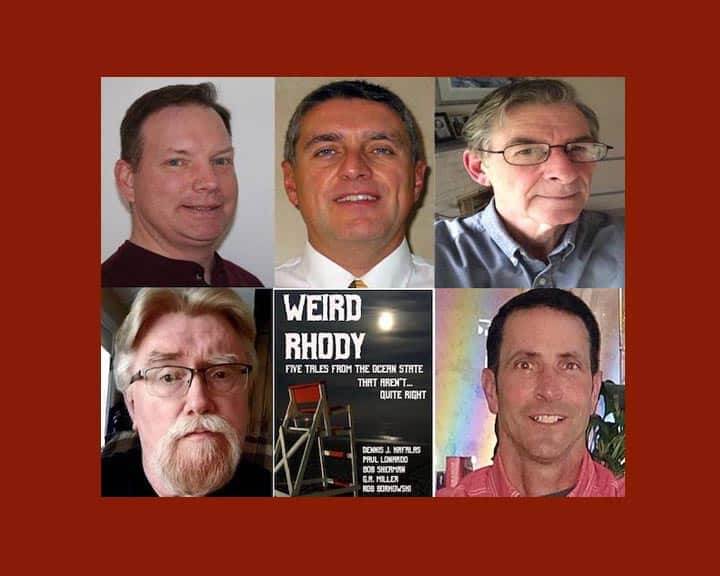 WARWICK, RI — Conjuring the macabre, five Rhode Island writers, united by a call for stories from Warwick Post publisher Rob Borkowski, have created Weird Rhody, an anthology of  horror stories of the mysterious, the supernatural and the unexplainable.

Aptly titled, Weird Rhody was released on Sept. 2, and is available for sale and download on Amazon. Released just before Halloween, the five stories embody the enigma that is Rhode Island. Capitalizing on all that the smallest state in the union has to offer, including mafia mystery, seashore secrets and holiday horror.

Keeping things Rhody centric, the cover of the book depicts an ominous, yet appropriate photo taken in 2013 by Mary Carlos, “Salty’s Chair”, at Salty Brine Beach in Narragansett, RI, paying homage to the iconic Rhode Island WPRO radio host Salty Brine who was famous for, among many other things, calling snow days in “Fosta – Glousta” on WPRO AM.

“There is a lot of inspiration to write about here in Rhode Island,” said Dennis Kafalas, whose story, “Spending a Day,” about a father who meets up with a mysterious little girl at the beach, raising haunting thoughts, is part of the collection.

“Weird Rhody draws its heart from the classic tales of “The Twilight Zone” and its soul from the best of Stephen King’s shorter fiction.” — Jon Land

“Weird Rhody draws its heart from the classic tales of “The Twilight Zone” and its soul from the best of Stephen King’s shorter fiction. This splendid collection of stories, from authors who call the Ocean State home, contains enough thrills and chills to keep readers turning the pages with quivery fingers long into any night.”

Land added, “From haunting children, to the price of fame, to a morbidly-themed Christmas tome, here are five tales from inside “The Outer Limits”, guaranteed to leave your knuckles white and arms prickled with goose flesh.”

Borkowski, who put the book together and also has a featured tale in it entitled, “Wight Christmas,” about a roommate who learns that lacking respect for holiday spirits can draw unwelcome attention, said he received some great submissions when he sent out a call to the members of the Association of Rhode Island Authors (ARIA) to submit stories for an anthology, which was intended as a gift to yearly subscribers of the Warwick Post.

“A theme of haunting tales began to make itself apparent as I pored over the stories,” Borkowski said. “The fact of H.P. Lovecraft’s (Howard Phillips Lovecraft, a famous Providence native and American writer of weird and horror fiction) birthday approaching at the time wasn’t lost on me, either. I decided to follow serendipity’s lead, and create a weird collection of chilling tales. That’s how Weird Rhody was born.”

While the original anthology collection was a success and well-received by Warwick Post subscribers, Borkowski decided to seek a wider audience for the work.

“I’ve been itching to see how it fares among fiction lovers, as a standalone piece,” said Borowski, who is proud of the book and the attention it has received.

Borkowski isn’t sure if his own writing prowess lies purely in the vein of the traditional horror genre. He is currently working on another collection of dark science fiction tales.

Bob Sherman, who has written many stories about the places he has been and the interesting people he has met, calls himself a history buff of sorts who loves to write about Rhode Island based mysteries, because he infuses his characters and the action with places he has lived and visited. Most of his mysterious Weird Rhody tale takes place in Cranston, in Garden City.

Sherman said his writing process always begins with developing a character or characters, having the beginning and the end of his story and letting the middle take shape on its own.

“It’s always my last paragraph that makes people say, ‘I wasn’t expecting that.’ And that’s really the main purpose of all my stories,” said Sherman, whose tale entitled, “The Greater Good,” presents a killer boasting super-human abilities.

Sherman explained that all of his characters, good and bad, are people he imagines he would enjoy meeting.

For Kafalas, retired school principal, writing has been a part of who he is since he was in his 20s. He said his story, “Spending a Day”, set in Westerly, is about appreciating what you have.

“This whole book is an enjoyable read and the stories are all very well written, thought-provoking and offer a variety of interesting and engaging tales that many will enjoy reading,” said Kafalas, who is grateful for all the hard work that Borkowski has put into getting this book together and editing it.

G.A. Miller, who grew up reading Stephen King and Edgar Allen Poe and watching the Twilight Zone, called Weird Rhody a buffet of stories that will appeal to many.

Thrilled by ghastly and ghoulish tales of the macabre from a young age, Miller’s tale, “Blind Demo,” is about the populace of a small town swayed by a haunting tune, set in the fictional RI village of Carson’s Mill.

Retired from a four-decade career in the technical field, Miller encourages other writers to follow their dreams, write for themselves and always keep their four-year-old imagination alive.

For more information about Weird Rhody and more to come, visit fantasticforay.com.

Categories: Good Times, News to You