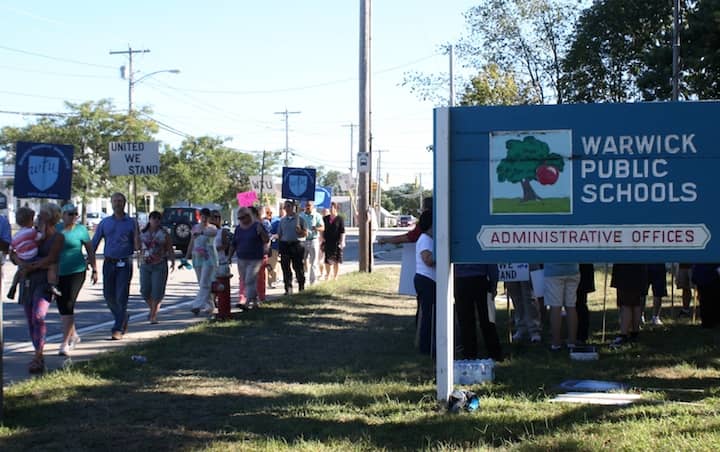 WARWICK, RI — Dozens of teachers, parents and taxpayers picketed in front of the Warwick Schools Administration Building on Warwick Avenue Monday, calling for a teachers contract and changes in the school consolidation plan as passers-by honked their support.

The picket was organized by members of the Warwick Teachers Union # 915, AFT/AFL-CIO, who have been working without a contract since Aug. 31, 2015.

Picketers held signs reading “teachers deserve a contract,” and “S.O.S. – Save our Schools,” joined by some students after they were dismissed from school.

Among them were members of the Simcoe, Strauss and Spolidora families, some of them students of Randall Holden Elementary School, one of two schools slated for closure in the current elementary schools consolidation plan.

The children and their moms were happy to support the teachers, wearing Randall Holden t-shirts and carrying hand-made signs.

“We have the highest test scores in the city, and we have the best teachers in the city,” said Ian Simcoe, mother of Caroline. She realizes elementary school consolidation is inevitable, but after watching the chaos of the secondary schools consolidation, she’s worried.

“They need to slow down, and finish what they started [before considering elementary schools],”Simcoe said.

“When she heard about [the school’s possible closure], all she could do was cry,” Simcoe, indicating her daughter.

“I love my teachers,” said Caroline. One of the family’s handmade signs read, “My teachers + my school = my family.”

Randall Holden parent Sandi Strauss was also worried about the possible closure of the school, where her six-year-old son Dustin recently started first grade. They live close enough to walk to school now, but he would have to take a bus to another school.

“From what I hear, the buses are overcrowded, and there are not enough bus monitors,” Strauss said. Dustin waved at his kindergarten teacher from last year as she walked by in the picket line.

“We had a Randall Holden parent, Tracy McKay, who brought us bottles of water and cookies [during the picket],” said Darlene Netcoh, WTU Union president of the parent support.

“Today is a one-day informational picketing, on two issues. One, they botched the consolidation of the secondary schools. They need to straighten out secondary schools before they touch elementary schools,” Netcoh said.

She was also critical of the affected schools’ portrayal in the media, and of the administration’s choice to overhaul gyms, auditoriums and entrances before updating classrooms.

“Toll Gate went without an auditorium from the time it was built, in the early 1970s, until 2000 – almost thirty years, and it survived,” Netcoh said.

“Secondly, the scheduling problems that they [school administration] created violated our contract. Our superintendent [Philip Thornton] has no recent classroom experience – neither does our director of special services, Jennifer Connolly,” she explained. “We have a provision in our contract called ‘weighting,’ which means that we count students with special needs as more than one student, which helps keep the class size down,” she continued. This would include students with Individual Education Plans (IEP)s, but not those with 405 access to learning plans, or English as a Second Language (ESL) students.

“Because they violated our weighting, we have, for example, a classroom with 28 students, 15 of whom have IEPs,” she added.

The administration and the teachers continue to work towards a new contract.

“In December, 2014, we sent a letter to them asking to start negotiations, which would have been plenty of time. They didn’t respond until the summer of 2015,” Netcoh said of the administration. “Their side wanted mediation – we did that last fall with the interim superintendent, William Holland. Philip Thornton was hired Oct. 9, 2015, and went to one mediation session on Oct. 29, and then decided to file for arbitration. Now they were paying for an impartial arbiter, a partial arbiter, their lawyer, and in July, a third lawyer,” she said.

“They are wasting hundreds of thousands of dollars – why do we need a PR company?,” Netcoh asked.

The teachers have gone through the consolidation process before. The City had at one time twenty elementary schools, which were consolidated to 16. Some of the older strikers participated in strikes over those struggles as well.

Brian Flood, a 30-year veteran of Warwick Schools, and a teacher of music at both Robertson and Randall Holden, was wearing what he called a “vintage sign” which read “treat teachers fairly.”

“This sign is from about 1990 or 1992 – we went through terrible strikes in the 1990s. We had two, actually,” he said. “We made concessions [then], and we’re not against concessions – they just stopped talking,” he said of the current administration.