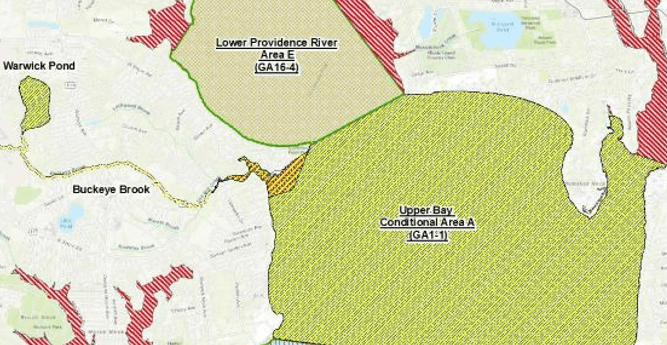 “DEM first became aware of the discharge Sept. 12 at 8  p.m.. As of 10 a.m. today, the Warwick Sewer Authority was working to install temporary bypass pumping and estimates that around 450,000 gallons had overflowed to Warwick Pond. The discharge is ongoing,” DEM reported in a statement Tuesday afternoon.

“As president of the Buckeye Brook Coalition, and their being the official RI State Designated Local Watershed Council for that watershed, and something similar happened a few years ago, I posted on BBC’s FaceBook page,” Zarum said in an email seeking comment on the leak.

As a precaution, DEM and the Rhode Island Department of Health (RIDOH) are advising residents to temporarily refrain from both primary contact recreational water activities (wading, swimming) and secondary contact activities (canoeing, kayaking, rowing, and fishing) on Warwick Pond, Buckeye Brook, Mill Creek, and Mill Cove and to avoid consuming any fish from these waters (see map above) until further notice. Swimming in any area currently under the extended emergency shellfish closure is not recommended.