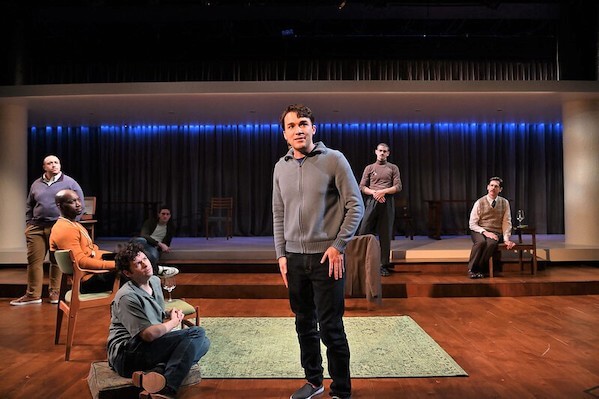 PROVIDENCE, RI — Trinity Repertory Company opens their 2022-2023 season with  “The Inheritance,” a compelling look at the gay mens’ relationships and legacy in America.

Featuring a sprawling run-time (3 plus hours with two intermissions; Part 2 opens September 22) and a lively group of gay men as the major players, this show is alternately poignant and racy.

I can’t recall a play in recent memory which has served as a more unabashed celebration of gay male sexuality.

Taking place from 2013 through 2017, the story depicts the steamy relationship between Eric Glass (Jack Dwyer) and Toby Darling (Taavon Gamble), who share an apartment together.

Things turn fractious between the couple when Toby’s book is published and is optioned for a movie adaptation. Eric befriends a sophisticated older man, Walter (a stellar Stephen Thorne), who takes a shine to the handsome intellectual.

Another subplot features the hunky Adam (Chingwe Padraig Sullivan), an up and coming actor whose career explodes.

And there are the Jasons (Rodney Witherspoon II and Adrian Peguero), who get married and announce their intentions to adopt a child.

Gamble (“A Tale of Two Cities”) is at the top of his game as the ambitious Toby, who condemns Forster for not doing more to advance the cause of gay liberation when he was young.

Dwyer, a relative newcomer to Trinity Rep., is also outstanding as a man struggling between his feelings for two very different men.

A heated argument between Toby and Eric is a highlight, as is Dwyer’s closing monologue, which pays tribute to the past while mourning all the lives lost due to AIDS.

There’s also a scene when the friends are gathered together to watch the 2016 election results with a sense of growing apprehension as Hillary Clinton saw the presidency slipping away as state after state was declared too close to call.

A light moment in the show features a discussion of “camp” and how gay culture is slowly being watered down by mainstream society. There are also references to historical figures like Harvey Milk and Stonewall, the beginning of the gay rights movement.

A word of caution: there are very explicit descriptions of certain sex acts between men. I can only imagine the horrified reactions of conservative politicians to the dialogue being exchanged between Toby and Eric.

One of the men describes in great detail a visit to a gay bathhouse, where towel-clad patrons roam the halls looking for wild sex. There is also partial nudity.

I applaud Trinity Rep. for examining the lives of gay men. There are so many stories focusing on heterosexual relationships, in both theater and film, that it’s a refreshing change to show audiences a world they have only fleeting familiarity with.

When we think of things that can be inherited, our thoughts turn to money, houses, cars, etc.

What we really inherit is our history, which then gets passed down from generation to generation. Lopez, Wilson, and the performers remind us of how important is to remember the pioneers who came before us and the legacies they leave behind.

AIDS decimated an entire generation of gay and bisexual men. There have been new treatments introduced over the years and patients with HIV are living relatively normal lives.

“The Inheritance” is an often compelling look at flawed, very human characters trying to navigate their way through life.