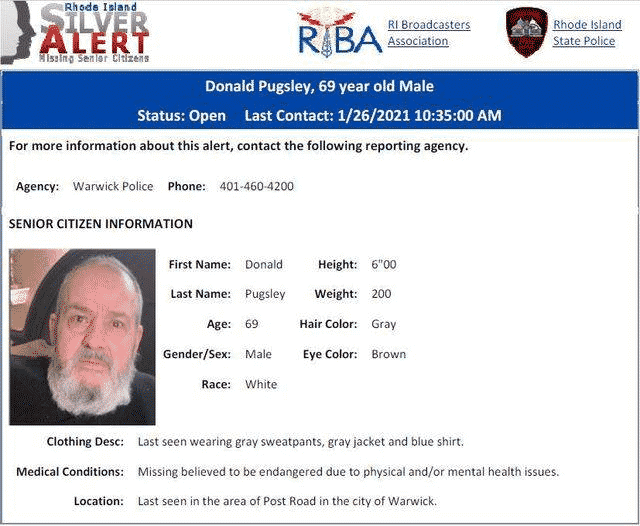 UPDATE: Warwick Police report Pugsley was located by Cranston Police. His car has not been located, and and the WPD request anyone with information about its wherabouts to contact them.

Donald Pugsley, who suffers from dementia and other medical conditions, has been missing since taking his wife’s vehicle while waiting for her at an appointment at 10:30 a.m. Tuesday. Police say he should not be on his own. He was last seen in the area of Post Road.

Pugsley is driving a maroon-colored Honda CRV with Rhode Island registration WT-585. Police say his wife believes he may have taken her car looking for a Dunkin’ Donuts, however, he is not familiar with the area.

Pugsley is described as a white male. He is 6 feet tall, weighs 200 lbs. and has a beard. He was last seen wearing grey sweatpants, a grey jacket and a blue shirt.

If you have any information or see this vehicle you are asked to contact Warwick Police at 401-468-4200.