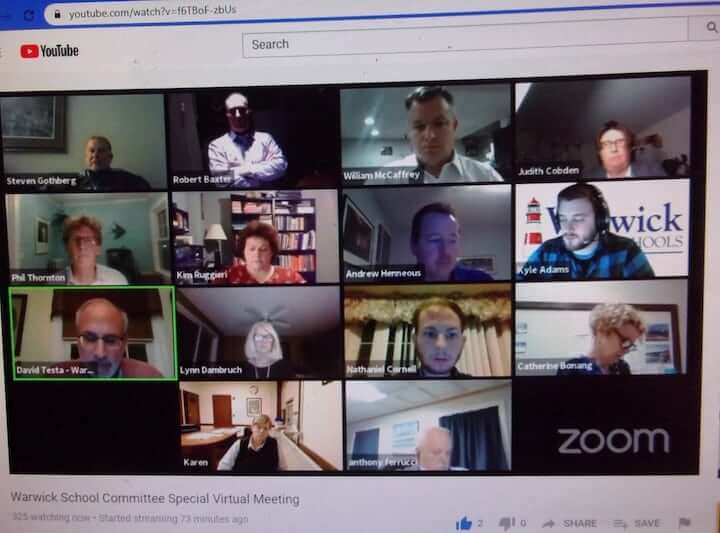 “We’ve had an incident of that going on where someone sent their child to school and now two people are very sick from it. It’s nerve-wracking for everybody.” — Judith Cobden

WARWICK, RI – Rising COVID-19 rates  have prompted the Warwick School Committee to delay a return to in-person learning until at least Jan. 4, but members aren’t sure even that delay is cautious enough.

On Monday, the surging cases of COVID-19, threatening to overwhelm the state’s hospital system, had prompted a two-week “pause” of gatherings and some businesses.  Currently, 97% of the state’s hospital beds are full and hospitalizations are increasing at a faster rate than they were in the spring.

“I’m a little bit concerned about the Jan. 4 date because of those spikes, so I don’t want anything put in stone,” Chairwoman Karen Bachus said Tuesday.

“I’m very nervous about these dates,” said Vice-Chair Judy Cobden, noting faculty and students had been infected with coronavirus.

“Teachers in Warwick schools have contracted COVID-19 from their students. No one can definitively say that schools are the safest place to be.” — Darlene Netcoh

“I want (parents) to be cognizant about sending their kids to school when they’ve been exposed to it or they have it,” Cobden noted. “We’ve had an incident of that going on where someone sent their child to school and now two people are very sick from it. It’s nerve-wracking for everybody. We do need to stay with the facts and we do need to go with the numbers. Right now, the numbers aren’t looking very good. We just need to hold off until our numbers are better.”

Member Nathan Cornell brushed off assertions that schools were immune from the virus.

Superintendent Phil Thornton attempted to assuage the committee’s fears about a return to in-person learning.

“We certainly know we have the virus in Rhode Island,” Thornton said. “We have to be grounded in science and our medical experts. The experts have said consistently that schools are the safest place for children, especially K through 8.”

Member Kyle Adams believed a spike in cases may be possible due to the Thanksgiving holiday.

“If the numbers spike for Thanksgiving, I imagine they’re going to spike for Christmas and New Year’s,” he added.

Darlene Netcoh, President of the Warwick Teacher’s Union, said it wasn’t the right time to return to in-person learning.

“Based on anecdotal evidence, (students) are transmitting the virus even if they are not showing any signs of it,” Netcoh wrote. “Teachers in Warwick schools have contracted COVID-19 from their students. No one can definitively say that schools are the safest place to be.”

“Nobody knows what tomorrow brings,” said member David Testa. “The planning goes forward as if we want to go in Jan. 4 and we react to what happens between now and then.”

Assistant Superintendent Lynn Dambruch shared the results of a survey sent out to parents.

In the survey, 71 percent of the respondents opted for four days of in-person instruction. 29 percent opted for distance learning.

Committee members complained about a lack of notification about the surveys.

“I only found out (about the surveys) because parents and teachers e-mailed us about them,” Cornell said. “I had no clue they were even sent out. I’m tired of getting this information after everyone else gets it. This is a problem and we need to rectify this.”

“I’d like to know what the questions were before getting concerns back,” said Adams.

“It’s kind of embarrassing when we get contacted by our constituents and our teachers and we don’t know what they’re talking about. It just makes us look disconnected,” Cobden added.

Dambruch said the surveys had been discussed at previous school committee meetings and vowed to update the committee after the results of the surveys have been finalized.