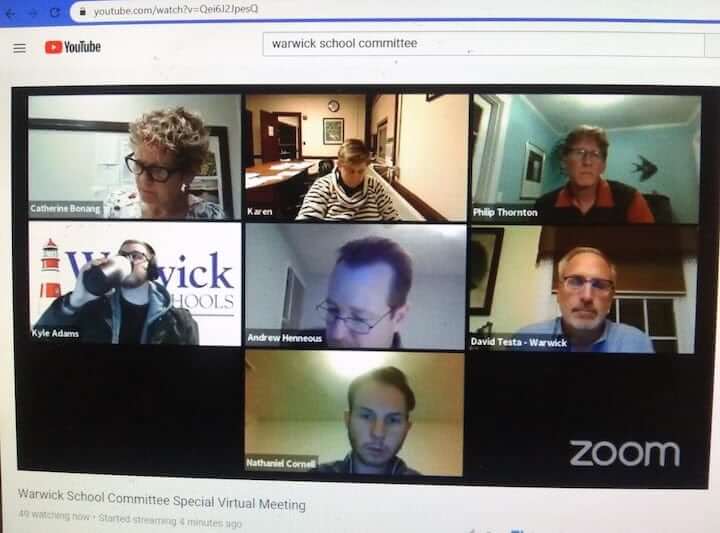 WARWICK, RI – The School Committee adopted a new public comments policy Monday night limiting how many words someone can say and the time they have to say it.

The Oct. 27 meeting’s public comment portion lasted two hours due to the high volume of correspondence.

This resulted in the committee not being able to vote on certain issues, including a distance learning plan, according to chairperson Karen Bachus.

“We are not getting the vital business done for the district that we need to,” Bachus said Tuesday. “The City Council provides the public with the ability to make comment on public matters for 15 minutes one time per month. Not two, one meeting per month. We have gone above and beyond, but we are not getting our work done.”

“At this point, it’s just gotten out of control,” said vice-chair Judy Cobden.

Member Nathan Cornell, the lone ‘no’ vote, said he was concerned about a limit on how many comments could be shared at the meeting.

“I was elected to do the work of the school,” Cornell replied. “But I was also elected to hear the concerns of the public. (Mandating) 10 comments maximum is too little.”

Bachus said if people did have concerns, they were free to contact the members of the School Committee. Bachus also stated 350 words was sufficient to express their thoughts.

When Cornell asked what would qualify as “salacious” comments, Bachus said “no swearing, no off-color inappropriate comments” would be tolerated.

“I think it’s very evident to anyone watching here is if someone is going to lace a public comment with f-bombs and swear words and things like that, they can’t expect that…” member David Testa said.

“Not going to be read,” Bachus interjected.

The public comments read at the Oct. 27 meeting were from teachers and parents who were outraged by comments made by Bachus at a previous meeting. Bachus acknowledged her comments had been “insensitive” and began the meeting with an apology to the teachers.