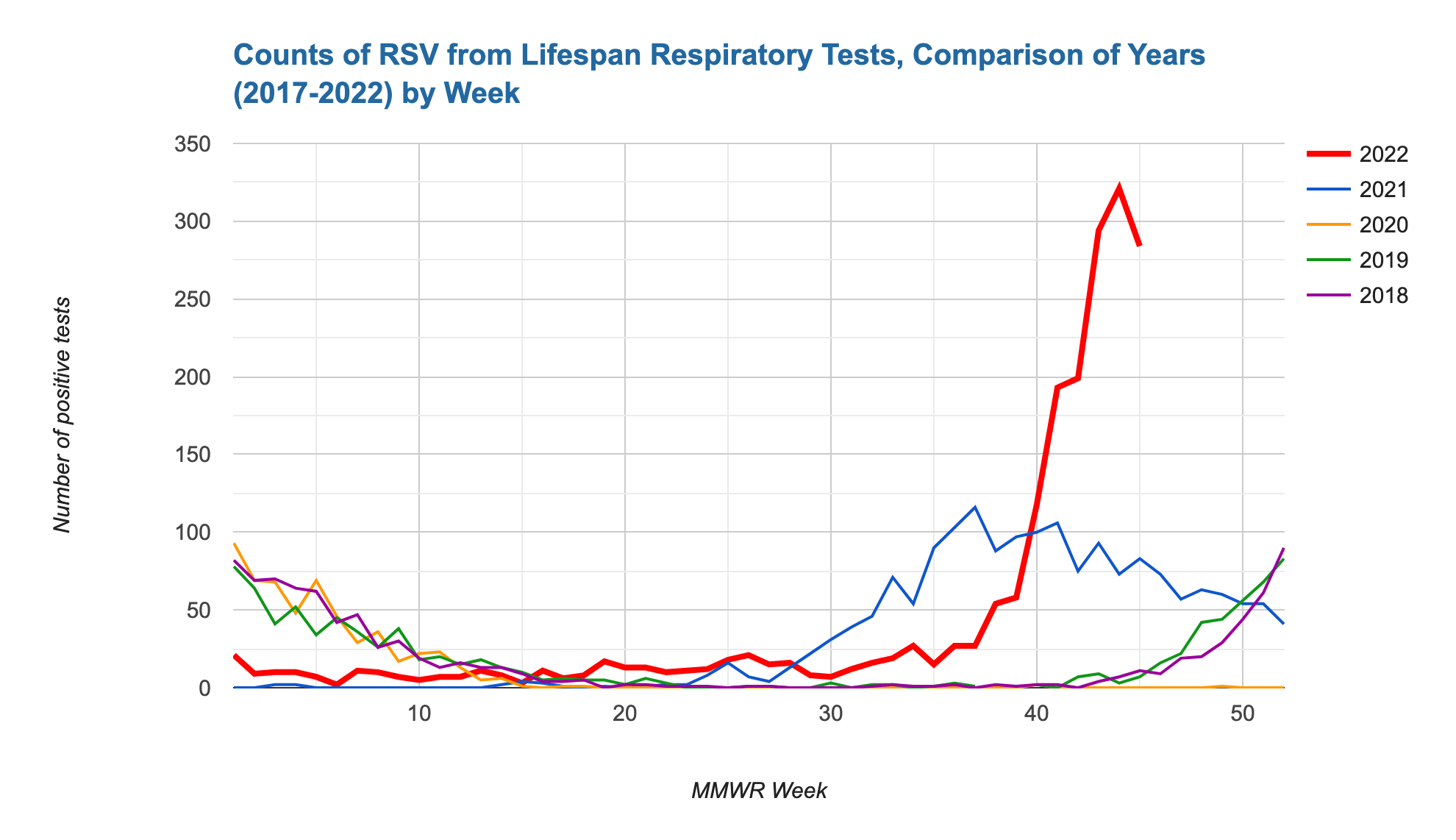 RSV is a common respiratory infection affecting children and adults. Most kids contract RSV before the age of 2. RSV is not usually a serious condition, but high risk groups — especially infants — can develop serious cases and require a hospital visit, according to Johns Hopkins Children’s Hospital.

Most children and adults with RSV will have mild symptoms similar to the common cold and recover in one to two weeks. In children younger than 1 year, RSV is the most common cause of inflammation of the lungs, such as bronchiolitis and pneumonia, according to Johns Hopkins.

RSV is considered very contagious, and can be spread by coming into contact with fluids from an infected person’s nose or mouth. This can happen by inhaling the droplets of the person’s cough or sneeze, or by touching a contaminated surface before touching the nose, eyes or mouth. Outbreaks often occur in classrooms, community centers and child care centers. By contrast, COVID-19 is not thought to spread primarily by surface contact.

In most cases, people with RSV are contagious for three to eight days after their first exposure. However, if an infant or someone with a weak immune system contracts the disease, they may be contagious for up to four weeks.

For a time, Hasbro Children’s Hospital’s pediatric bed capacity was completely taxed, but the situation has been improving.

“We are beginning to see some reprieve. As of this morning (Nov. 15), for the fourth consecutive day, the hospital’s capacity is under 100 percent. We are currently at 93 percent capacity,” said Kelly Brennan, Sr. Public Relations Officer at Lifespan, the parent company of Hasbro Children’s Hospital and Rhode Island Hospital.

But the rate of infections is still higher than in pre-pandemic years, at least as far as the timing goes.

“In the past, we have had similar surges, but they normally started later in the year – December, or maybe, January. This year we saw cases double from September to October,” Brennan said.

“We’re in the opposite of an ‘immunity wall’ for COVID. Due to the effective distancing and masking, we have a cohort of kids that are unusually susceptible to RSV and the same with (adults and kids) with flu,” said Don Thea, Dr. Don Thea, Professor and Associate Chair, Department of Global Health, Boston University School of Public Health, and an ABIM board-certified Infectious Diseases physician.

“As you can see last year there was no influenza (blue line) and this year it is roaring to an early start. We’re also likely seeing the same phenomenon with the multiple other respiratory infections that circulate at this time of year (e.g. human metapneumovirus) and also seeing dual infections, making some cases particularly severe,” Thea said.

The surge has led hospital leaders to urge patients to only visit emergency rooms if they’re in need of emergency care. Johns Hopkins Children’s Center urged the public to make sure they reserve emergency room visits for the following situations: