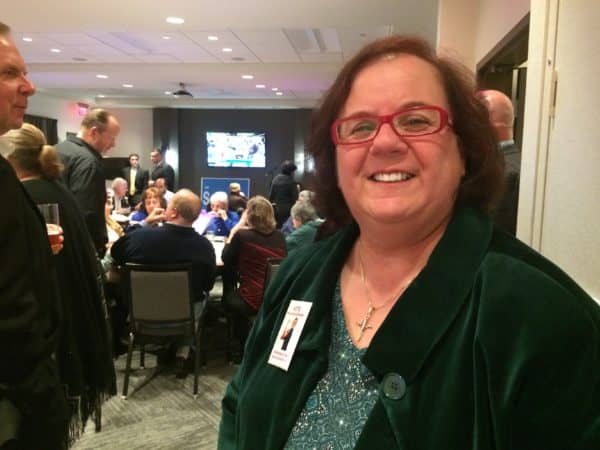 STATE HOUSE — Rep. Camille F.J. Vella-Wilkinson (D-Dist. 21, Warwick) will be the first female veteran to receive the Verrazano Day Person of the Year Award in 60 years this spring.

Vella-Wilkinson will be honored at a black-tie event on May 21 by the Verrazzano Day Observance Committee.

The award was established in 1961 by the Department of Rhode Island Italian American War Veterans and the Grand Lodge of Rhode Island, Order Sons and Daughters of Italy in America.

The Verrazzano Day Observance Committee was incorporated by the two Italian-American organizations to honor the memory of Giovanni da Verrazzano, the Florentine navigator who discovered Narragansett Bay in 1524 and who described in his report to King Francis I that the island which he discovered was like the “Isle of Rhodes.”

From his report, history credits Verrazzano for having been indirectly responsible for naming the State of Rhode Island. The annual event honoring the navigator also is held to honor an outstanding leader of the Rhode Island community.

The committee comprises 18 members of the Grand Lodge of Rhode Island, Order Sons and Daughters of Italy in America, and Department of Rhode Island Italian American War Veterans of the United States Inc.

The Italian American War Veterans nominated Representative Vella-Wilkinson for significant achievements during her more than 25 years of public service, including her career as a Navy officer, as an administrative hearing officer for the Rhode Island Commission on Human Rights, as a Warwick City Council member and in her numerous committee assignments in the House of Representatives, including the role of staunch veterans’ advocate.

“I nominated her for all she does for woman veterans,” said Linda D’Andrea Peck, a Gulf War era Veteran and Veteran Service Officer for the town of Burrillville. “She understands the challenges women veterans continue to face and has never turned her back on any of us.”

“I am extremely honored to join the ranks of those who have received this award in the past.” said Vella-Wilkinson. “I hope this encourages more organizations to recognize what female veterans have done for their country. Additionally, I am especially honored that profits from the awards dinner will be placed in a scholarship fund to benefit Rhode Island students of all nationalities and ethnicities.”