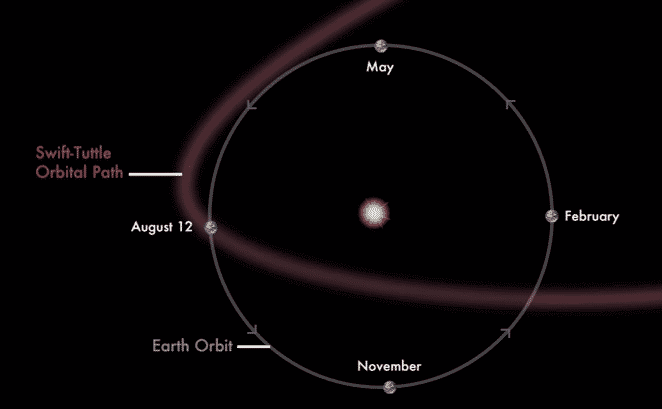 The Perseid Meteor Shower, nature’s annual late-summer spectacle, is past its peak (Aug. 11 – 12), but night owl timing, clear skies and a waning moon mean there’s still a good shot at shooting stars Tuesday as Earth orbits through the remnants of comet Switft-Tuttle this year.

According to NASA, “midnight to dawn any morning the week before or after (the Perseid peak) should produce a few meteors. The Perseids generally appear to radiate from a point high in the north, called the “radiant.” But you need only point yourself generally toward the north and look up.”

Not only is there still a good chance at seeing a number of meteors Tuesday, when rain and clouds predicted the next few days will finally clear, the waning moon will be nearly fully dimmed just before the New Moon Wednesday (when clouds are unfortunately forecast again). This makes Tuesday a better opportunity to see the Perseid Meteor Shower than during the peak, when a quarter moon threatened to block out many of the dimmer specimens.

Interested meteor watchers should focus their viewing between midnight and dawn, and get as far away from city and town lights as possible.

The Frosty Drew Observatory in Charlestown (the best spot in the state for stargazing with the least light pollution within the borders) has already hosted its annual Perseid Meteor Shower viewing party, but opens on Friday, Aug. 14, 2020 with a limited access, ticketed Post Perseids Stargazing Nights event.