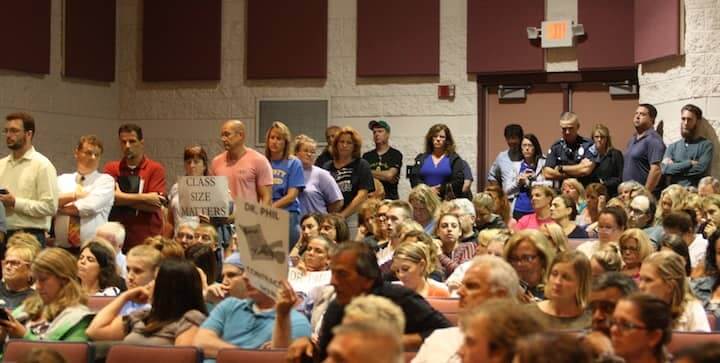 WARWICK, RI – Holding signs that read “Class size matters” and “Dr. Phil – Stop Wasting Tax Payer Money,” and “Contract Now,” teachers and parents nearly filled the auditorium of Toll Gate High School for the meeting of the Warwick School Committee on Tuesday, Sept. 6. The high turnout was due to an item at the bottom of the meeting’s agenda – elementary school consolidation – as well as complaints by parents and teachers about the first week of school.

Parents and teachers lined up to make public comments, usually limited to a half hour and to two minutes each, extended to a full hour due to high demand. The line stretched from the podium at the front all the way to the back of the auditorium. Police and fire details were on hand due to the high turnout for the meeting.

The complaints were mostly resulting from the recent consolidation of secondary schools, including the closing of Gorton and Aldrich junior high schools and the creation of Veterans Middle School, ending its long tenure as a high school. Resultant overcrowding, traffic and drop-off concerns as well as other safety issues with the buildings were addressed during the public comments.

Several parents were dismayed at how the newly renovated Pilgrim High School and Veterans Middle School were portrayed in the media, based on tours of “public areas” of each building – entrance, gym, auditorium upgrades, which were rushed to be finished in time for the first day of school, at a cost of $3.2 million.

“The work this summer, this is a beginning, not an end,” said school superintendent Philip Thornton. He estimates that it will cost $250 million for necessary building upgrades to all schools, and had planned to ask taxpayers for $75-90 million in bonds next fall to start phase II, to include windows, ADA, electrical, HVAC.

Before the public comments were made, Thornton went over the student totals.

The range of complaints about the buildings included paint fumes, a non-working P/A system, a new phone system that many staff did not know how to use. Technical and equipment problems included spotty wi-fi connections, non-functioning Xerox machines, and, in some science class rooms, the use of hot-plates instead of Bunsen burners.

Teachers had not been told that students would be supplied with binders by the district – they are usually purchased by parents – none had binders for the first day. Students were also to be given Chrome Books to use in class, but not all students had received them. One teacher returned her school-issued Chrome Book during the meeting to the technology director, saying that she had no secure place to store it at school.

“Starting school without the necessary equipment is inexcusable,” said Vets teacher Mike Pierce. “They had the auditorium done – it looks great, but no classes are held in it,” he added.

Other teachers told of high numbers of students in classrooms, some with high percentages of ESL students and students with IEPs. Others complained of too few chairs and tables in classrooms, of students having to stand in class. Another teacher said there were mold spores on the ceilings of each of the five classrooms in which she teaches, and she is allergic to mold.

Many of the teachers publicly thanked school committee member Karen Bachus for visiting Pilgrim during the first week of school, and visiting more than just the newly renovated gym and auditorium.

Jeremy Rix of Ward 2, claims “consolidation was rushed,” adding that people don’t want to move to Warwick because of the current schools situation. Another parent said the consolidation has also affected student athletes.

Several during public comments called on the school committee to uphold its promise of being “fair and equitable” to all the schools in the district. “Parity doesn’t exist, there’s a two-tiered system – we have children on one side of the city who are given opportunities that are not given to children on the other side of the city,” said one speaker.