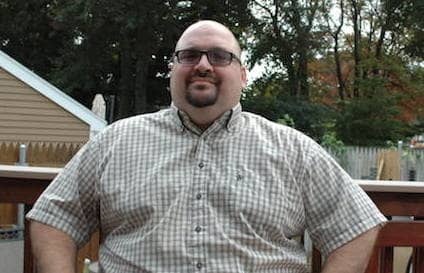 Warwick, RI — Dean Johnson, 37, lifelong Warwick resident and Army vet, isn’t shy about tough calls, so when the School Committee discarded two school consolidation plans in favor of a consultant, he figured he could do better.

“Why are we electing these people if they’re not making the decisions?” Johnson asked.

Johnson said that while the school consolidation issue is what pushed him to decide he should run, he also has some good ideas.

For example, he said, he’d like to re-do Warwick’s Vocational-Technical program, turning it into a place where students can get more effective training technical employers are looking for.

But looking forward is a luxury the School Department can’t seem to afford, given the aging buildings it’s operating in, he said.

“It just seems they’re constantly fighting the battle ‘right now’,” Johnson said, with no eye to the future.

Aldrich Junior High, for instance, he said, built in the 1930s, needs a lot of work. The School Department just spent $1 million upgrading the fire system at the school, Johnson said.

“My grandmother went there,” Johnson said, but the fire system isn’t the only thing that needs updating in the building.

“The building’s so old, you’re pretty much going to have to re-do it,” Johnson said.

Focusing on the future of the School Department’s programs and overdue repairs can’t happen while the district continues struggling with the question of what to do about the decreasing enrollment in the city’s schools, he said.

“I do think that’s part of it. Nobody wants to be unpopular, but someone has to make the hard decision,” Johnson said.

Johnson said he’s not afraid to make tough choices, even if that means he only serves one term on the School Committee. The former Army specialist has sacrificed himself for others before.

On April 9, 2000, at 3:30 p.m., after returning from Bosnia, Johnson found himself in a freak snowstorm on a New York State highway. He stopped to help two drivers who had spun out on the slick road without incident, but the third he stopped for proved fateful.

Inside the car were an elderly couple and their 14-year-old grandson. The couple stepped out of the car and were standing near the guardrail on the highway as Johnson searched his truck for tools, Johnson said.

Johnson, a young 230-lb. man at the time,  saw an 18-wheeler headed for them in his truck’s mirror, he said. He ran for the couple, knocking them in turn over the guardrail. The semi struck his truck, pushing it into the couple’s car, where the  boy was. The boy survived the impact, but the 18-wheeler pinned Johnson against the guardrail, crushing his legs.

The family survived, but Johnson lost his legs. He was hailed a hero following the accident, and interviewed by the Warwick Beacon and also by the Providence Journal. The Army presented him with the Soldier’s Medal (awarded for heroism not involving combat) and he was also the Hometown Heroes keynote speaker in New York on May 3, 2001.

“Lost both my legs, saved three lives. It works out,” Johnson said.

These days, Johnson lives on Essex Road with his wife, Heather and boys, a fourth grader and preschooler. He’s been retired from the Army since 2000, leaving on a medical discharge.

“I think Eugene seems like a really nice guy. I think his intentions are good,” Johnson said, “He’s unfortunately the one that I have to run against.”