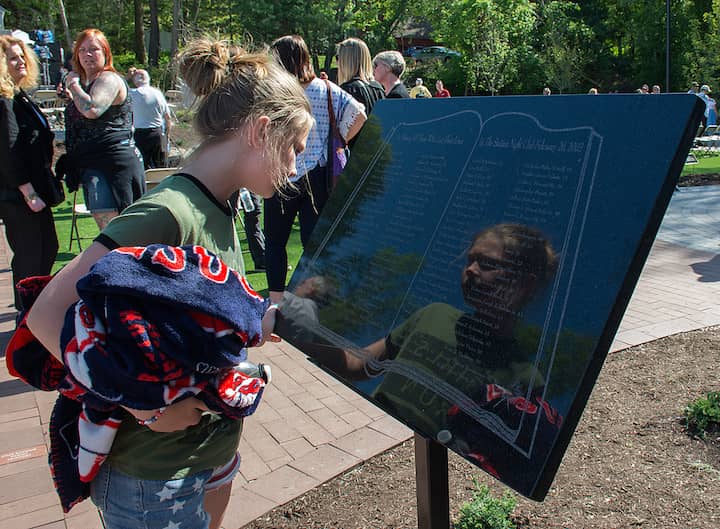 WEST WARWICK, R.I.  — More than 500 people gathered inside the 1-acre Station Nightclub Fire Memorial Park at the site of the tragic Feb. 20, 2003 blaze that claimed the lives of 100 people, dedicating the space to the memory of  loved ones and friends lost that night.

More people gathered in the small lot outside the memorial, on the sidewalk across the street, and on Kulas Road adjacent to the freshly finished park and garden at 211 Cowesett Ave. as officials spoke of lives lost, the selfless efforts of first responders, doctors, and local businesses following the immediate weeks and months following the fire, the fourth deadliest such fire in US history.

It was difficult to tell with people crowding nearly every standing and sitting space inside the park, but brick paths wound through artificial turf to 12 circular spaces. In the center of each space sat a round stone with ’45 record’ adaptors in raised relief in the center. Around each stone sat several memorial stones bearing the faces, names and birth dates of the 100 people killed in the fire. At the center rear of the park, under a pavillion, was a timeline of the station fire, beginning decades before the fire and continuing through the following 14 years.

The work to build the memorial was not wasted on many of the friends and family of people lost to the fire.

Sisters Emily and Maria Fresolo stood next to the stone for their father, Michael A. Fresolo, with their cousin Toni Fresolo and Meghan Bruso, a friend, during the ceremony.

The young women were pleased with the memorial for Michael and the other people lost in the Station Fire.

“I’m really thankful for all the people who put so much time and effort into it,” said Emily.

“I think it’s beautiful,” agreed Claire Bruyere of Warwick, who was watching the ceremony from the memorial stone dedicated to her daughter, Bonnie Hamelin. Bruyere was at the dedication with family friends Anne Ellis and her son, Robert, friends close enough to family that Robert called Bonnie his aunt.

In particular, Bruyere was happy with Bonnie’s stone. “They did a good job with the picture,” she said. Bonnie, an aesthetician, took care in her appearance, she said.

The mother and daughter worked at the cafeteria at Electric Boat, which is where Rick Bonin remembers them from. Bonin always thought Bonnie looked like X-Files actress Gillian Anderson. “I used to call her Scully, because she looked like the actress,” Bonin said. “She used to get a kick out of it.”

Avedisian recalled the generosity of the businesses that lent their space and resources to aiding the fire victims and their families on the night of the fire, as well as the dedication of first responders and medical professionals in the hours and years after the tragedy, and expressed gratitude for Warwick’s small part in helping to make the memorial a reality.

Langevin noted how the fire seems to have touched all Rhode Islanders. “It seems that we all knew someone in this tragedy,” he said, “Because this is Rhode Island. It’s like a big neighborhood.” He said the memorial tells the world that those lives lost and harmed by the fire matter, and will not be forgotten. 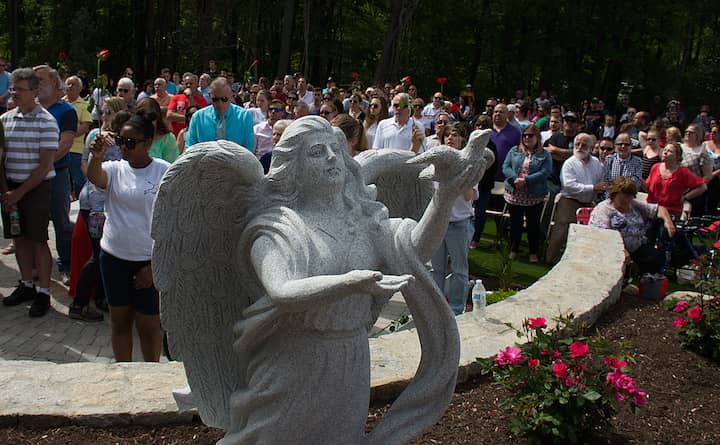