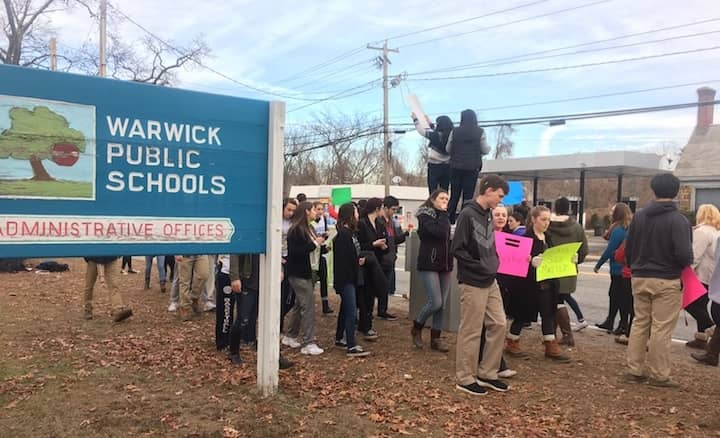 WARWICK, RI — This afternoon, the 100 students who walked out of school before their final class Dec. 21 to protest Warwick Public Schools’ Special Education practices will serve a three-hour detention penalty students and teachers say is excessive, a claim Superintendent Phil Thornton disputes.

One Pilgrim teacher noted on the Facebook group, Let’s Save Warwick Schools, that the punishment is unusually strict for students cutting class. Usually, the teacher said, write-up slips for students skipping class call for a verbal reprimand.

“Schools are enforcing regular consequences,” Thornton said when asked about whether the protesters received harsher punishment than usual.

The Warwick School Department Student Code of Ethics doesn’t address the the penalty for cutting class directly, though it is listed among the “Actions which Result in Suspension and/or Other Disciplinary Measures.”

Individual Education Plan (IEPs) and 504 education plans offer formal help for K–12 students with learning and attention issues. They are established in public education by the The Individuals with Disabilities Education Act (IDEA)and Section 504 of the Rehabilitation Act of 1973, respectively.

Zach Colon, Senior Class President at Toll Gate High, who organized the protest, said he and his fellow protestors are prepared to accept the discipline with dignity. However, he said, they are aware the punishment is more severe than their peers have received for skipping class.

Colon said he’s never been in trouble before now, and hasn’t spoken personally with teachers about the subject.

“But I know repeat offenders constantly get away with stuff and first time offenders usually just get a warning,” he said.