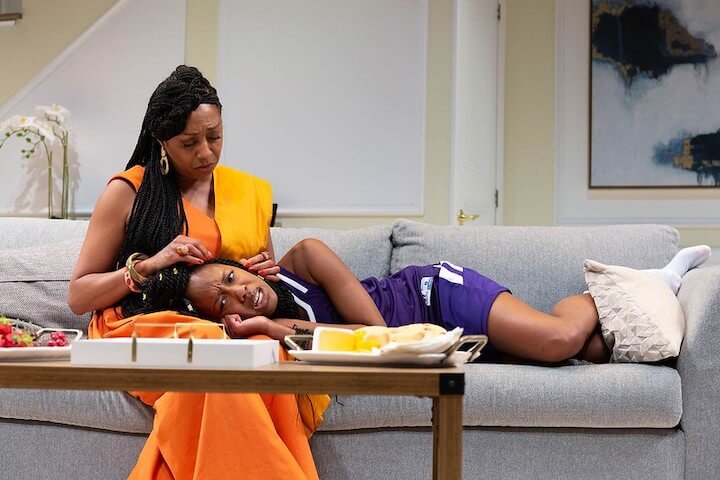 Trinity Repertory Company is wrapping up their latest season with Jackie Sibblie-Drury’s “Fairview,” a satirical examination of how whites perceive and treat people of color.

Mia Ellis (“Ragtime”) and Joe Wilson, Jr. (“The Mountaintop”) are Beverly and Dayton, an upwardly mobile African-American couple living in a posh mansion. And here I must give credit to set designer Lex Liang, who worked overtime to create a stunningly gorgeous backdrop for the characters. It’s a real beauty.

Beverly is preparing for a party to honor her mother. She is an unyielding perfectionist who wants everything to be just right.

Dayton is a loving and devoted husband. When Beverly asks for root vegetables for the dinner, Dayton is only too happy to oblige.

Their overachieving daughter Keisha announces her intentions to take a year off from college, an idea Beverly frowns upon.

Beverly’s know-it-all sister Jasmine (Jackie Davis) sashays into the living room with a lot of attitude and a bouquet of flowers. We can sense this woman is going to make trouble and that’s exactly what happens.

Beverly becomes increasingly agitated as she works to put every dish and piece of silverware in their proper order. Then the birthday cake burns and Beverly faints. The lights go down.

I will tread lightly from this point on, because the story becomes downright surreal.

Under the smooth direction of Christopher Windom, the actors give richly textured and engaging performances.

Davis is a real force of nature, exhibiting the supreme self-confidence of a glamorous diva. She’s tremendously fun to watch.

Ellis and Wilson, performers who I have seen many times, are at the top of their game as always. They bring conviction and passion to their roles.

The real discovery here is Aizhaneya Carter, making her Trinity Rep. debut as Keisha. Carter works the stage like a true professional and makes us believe in her character’s frustrations.

Sibblies-Drury, who is black, wanted to explore how misconceptions of the ways black people are expected to act prioritizes “the comfort of white people over basic respect for people of color.”

Before launching into an extended closing monologue, Carter encourages the audience to abandon their seats and walk onto the stage. This was supposed to symbolize putting yourself in someone else’s shoes, namely, a person of color.

Not too long ago, I saw “An Octoroon,” which also dealt with racial identity in a way which wasn’t condescending. That play was fearless in its language and dared to make the audience uncomfortable to get its point across.

By comparison, “Fairview” is a disappointment, despite the fine cast and excellent set and lighting design. It has an important message about people’s ignorance but gets sidetracked by absurdity and moments which play more as shock value than as legitimate plot development. For example, without any logical motivation, everyone goes berserk and tears the house apart. Furniture is overturned, food is flung, and the staircase is battered. It’s not funny, just senseless.

I was also annoyed by a secret which is revealed about Keisha. No spoilers here, but it goes against everything we have been led to believe about the character.

In a way, that secret can serve as a metaphor for this show. To see something which started off with so much potential only to lose its direction is a shame.