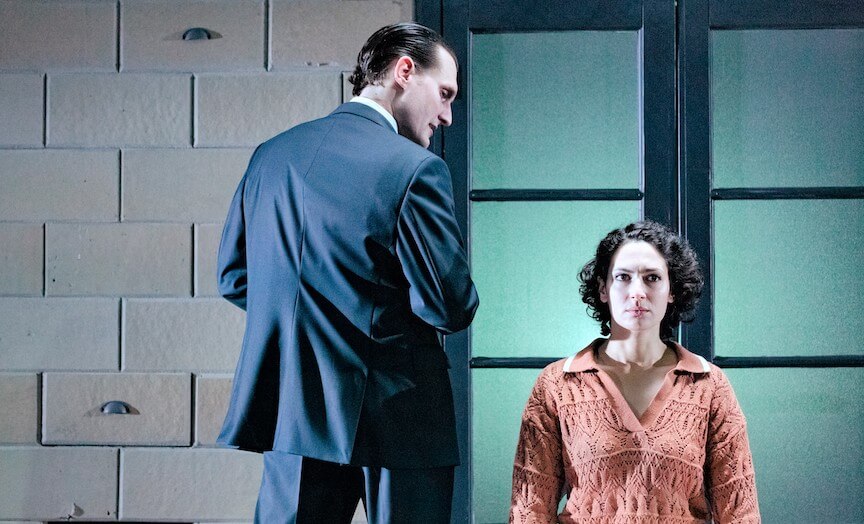 WARWICK, RI —The Gamm Theatre has launched its new season with “Describe The Night,” a spellbinding drama set in Russia.

Playwright Rajiv Joseph spreads the action over a period of 90 years, interlocking the fates of his characters as they experience war, persecution, and illicit romance.

The story is told non-chronologically, jumping back and forth through time. We meet Isaac (Michael Liebhauser), a writer, and his friend Nikolai (Sean McConaghy) during the Russian-Polish War in 1920. Isaac is first seen scribbling in a journal. He shares his observations with Nikolai and the two men form a bond which will last for many years.

They discuss the persecution of Joseph Stalin’s enemies by the NKVD (secret police). Political rivals and critics of Stalin were found guilty of treason and then executed or imprisoned.

Although “Describe The Night” was written before Russia’s invasion of Ukraine, we are reminded of how President Vladimir Putin’s reign of terror and violence against his political enemies continues unabated.

Isaac becomes infatuated with Yevgenia (Donnla Hughes, seen earlier this year in “Ironbound”), Nikolai’s wife. Isaac tells Yevgenia she could be a movie star and asks her read dialogue from one of his screenplays.

Another subplot features a journalist (Sophia Blum) and a car rental agent (Dan Garcia) dealing with the aftermath of a horrific plane crash which killed the President of Poland and 95 others in a Russian forest in 2010.

There is also Vova (Jeff Church), who is assigned to spy on Urzula (Gabrielle McCauley), an aspiring singer living with her elderly mother.

Director Tony Estrella (“Assassins”), assisted by his technical team, maintains a palpable sense of tension throughout and brings out the best in the performers.

Liebhauser (“A Midsummer Night’s Dream”) is outstanding as Isaac veers from romantic longing to desperation as his friendship with Nikolai is tested.

McConaghy (“A Lie Agreed Upon”) is also excellent as Nikolai reveals a hidden torment beneath a veneer of macho bravado. Unable to give Yevgenia the love she needs, Nikolai vents his frustrations in an explosive moment of rage.

Church (“An Octoroon”) is a master of physical expression, whether it involves falling to the floor after dining on leech-soup, or intimidating a captured journalist. In the latter scene, Church is positively chilling. We believe from his cold dead eyes and vocal intonations that there is tremendous evil inside him. This is a spectacular performance.

McCauley, making her Gamm debut, creates a sympathetic and seductive portrait of a woman seeking a better life.

Hughes is mesmerizing as the deeply tormented Yevgenia, who is committed to an insane asylum by Nikolai for her own safety.

Michael McGarty’s set design is simple but effective, immersing the characters in gloomy environments marked by war and deception.

Although “Describe The Night” was written before Russia’s invasion of Ukraine, we are reminded of how President Vladimir Putin’s reign of terror and violence against his political enemies continues unabated.

The threats, the constant surveillance, and lies being told by Putin’s government will not end any time soon.

As a historical document and a human drama, this production is a first-rate work of art. The Gamm always finds a way to raise the bar, and this time is no exception.