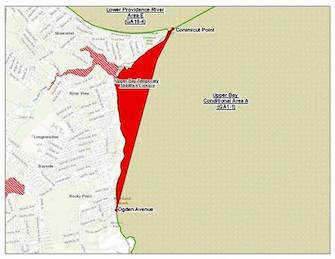 PROVIDENCE, RI —The Department of Environmental Management (DEM) has reopened most of the upper Narragansett Bay shellfish Area A  closed after a sewage spill on Lake Shore Drive Sept. 12.

DEM also is updating the estimated volume of untreated sewage — from the initial 450,000-gallon estimate to 161,600 gallons — that was discharged into Warwick Pond. The new estimate is based on a Warwick Sewer Authority (WSA) review by an engineer and data from the septic tank trucker haulers that the WSA hired to transport the sewage from the site to prevent more from being spilled into the pond. Warwick Pond flows into Buckeye Brook, which ultimately discharges to upper Narragansett Bay southwest of Conimicut Point.

Since the sewer pipe rupture, DEM required the WSA to collect bacteria samples at multiple locations around the pond, brook, and Old Mill Creek. These samples have shown a decline in bacteria levels since the initial spill. Also, water samples collected by DEM in Area A on Sept. 15 and Sept. 19 have shown bacteria levels returning to normal in all of Area A except at Mill Cove, where the creek empties into the bay.

Shellfish harvesting, however, continues to be prohibited in the waters west of a line extending from Conimicut Point to the extension of Ogden Avenue in Warwick.

With that information, DEM has reopened most of upper Narragansett Bay Area A to shellfishing. Shellfish harvesting, however, continues to be prohibited in the waters west of a line extending from Conimicut Point to the extension of Ogden Avenue in Warwick. This 170-acre area will remain closed to shellfishing until further notice. DEM will continue to test bacteria levels in the upper Bay to track recovery of water quality.