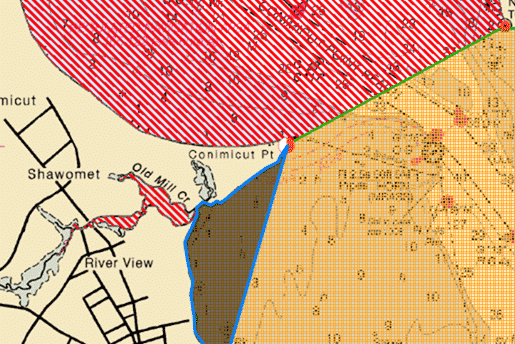 WARWICK, RI — The Department of Environmental Management has reduced Monday’s closure of Upper Narragansett Bay to shellfishing to a two-mile section of Warwick coastline in response to a he sewage overflow into Buckeye Brook on Sunday, Aug. 26.

The closed area includes all waters west of a line extending from the DEM range marker on Conimicut Point in the north to the extension of Ogden Avenue in the Highland Beach area of Warwick in the south. The modified closure is effective today, Sept. 1.

The Health Department also recommends avoiding contact with waters in Buckeye Brook from Cedar Swamp Road to areas downstream, including Buckeye Brook, Mill Creek, and Mill Cove Beach. Fishing and boating in these waters is not recommended.

On Sunday night, the Warwick Sewer Authority (WSA) discovered that sewage was overflowing into Buckeye Brook from a manhole near 910 Cedar Swamp Road due to a collapsed sewer line leading to the Cedar Swamp Pump Station. WSA set up temporary bypass pumping to alleviate the overflow and added chlorine for disinfection. WSA estimated that the failed line released about 300,000 gallons of sewage. The City has hired a contractor to complete the required repairs and bypass pumping remains in place (preventing any additional overflow) and is staffed around the clock.

During the closure of the western portion of Upper Narragansett Bay Growing Area 1A, shellfishermen are asked to identify any catch taken from the open harvest area of tagging area 1A as 1A-East. Area 1B is now re-opened; therefore, harvest from this area can be reported by the standard area 1B designation.

Status of this and any other emergency closures and of the  “conditionally approved” areas of Upper Narragansett Bay, Greenwich Bay, Mount Hope Bay, or the Kickemuit River may be obtained by calling 401-222-2900 24 hours a day.

Status of this and any other emergency closures and of the CONDITIONALLY APPROVED areas of Upper Narragansett Bay, Greenwich Bay, Mount Hope Bay, or the Kickemuit River may be obtained by calling 401-222-2900 24 hours a day.

DEM advises that Mill Cove to the Conimicut Point Outlet is permanently closed to shellfishing.

due to a sewage overflow Sunday