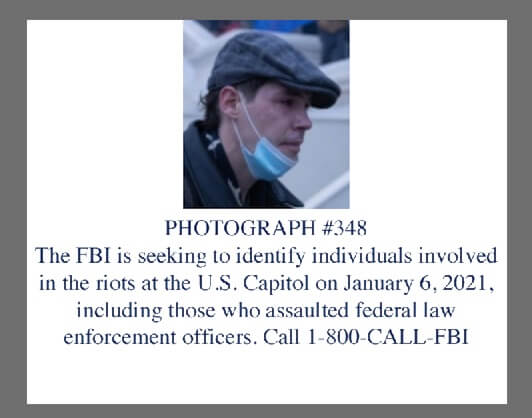 PROVIDENCE, RI — More than 675 individuals have been arrested in nearly all 50 states for crimes related to the Jan. 6 breach of the U.S. Capitol, including more than 210 charged with assaulting or impeding law enforcement, the latest a Providence man.

Timothy Desjardins, 35, of Providence, is charged with engaging in physical violence in a restricted building or grounds, civil disorder, and assaulting, resisting, or impeding certain officers with a dangerous weapon, among other charges. The criminal complaint was unsealed yesterday in the District of Columbia. Desjardins is in custody in Rhode Island on unrelated charges and will make his initial court appearance in this case at a to-be-scheduled date, according to the DC U.S. Attorney’s Office.

According to court documents, video footage shows Desjardins assaulting multiple officers in the tunnel area of the Lower West Terrace of the Capitol, at approximately 4:46 p.m. on Jan. 6, using what appears to be a broken wooden table leg. At the time, law enforcement was under assault from a crowd of other rioters who were pushing themselves into the tunnel and hurling various objects, such as a baton and table, at the officers.

The case is being investigated by the Providence Resident Agency of the FBI’s Boston Field Office and the FBI’s Washington Field Office, which identified Desjardin as #348 in its seeking information photos. Valuable assistance was also provided by the Metropolitan Police Department and the U.S. Capitol Police, according to the DC U.S. Attorney’s Office.