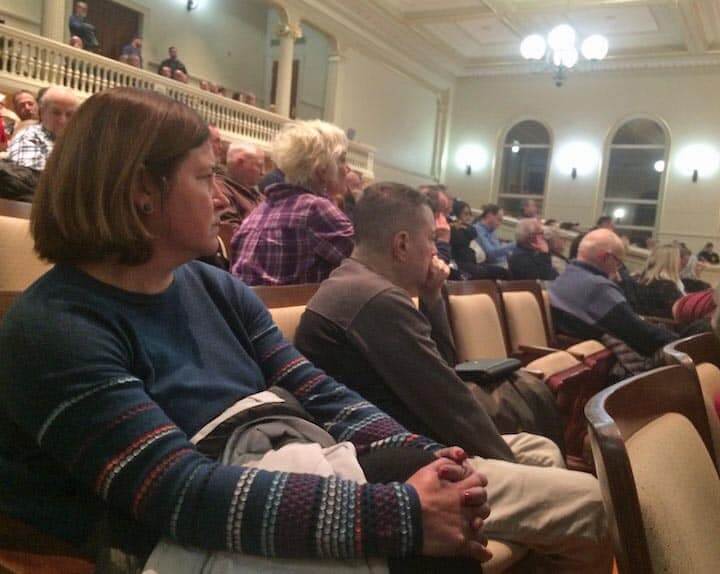 The move was met by loud applause and cheers from residents taking up the right hand side of the packed Council chambers, many of whom had spoken publicly during the previous two hours of the Finance Committee condemning the hastily called session to ratify the contract negotiated between Mayor Joseph Solomon and Warwick Fire Fighters Local 2748.

The Council meeting had a rocky start, as Merolla explained that longtime City Council lawyer John Harrington had resigned.

“I tried to convince him to stay. But he wouldn’t. He had had enough,” Merolla told the people gathered for the meeting.

After the meeting, Merolla said that Harrington had been attempting to slow down a bit in his service to the city. Merolla said he had been working to accommodate him to keep his 40 years of service to the city in the council’s corner. When the special meeting was called, surprising everyone, Harrington was not simply caught off guard, but juggling conflicting legal duties he’d had no reasonable time to manage. With appropriate notice, Merolla said, Harrington could have managed it, but the surprise meeting was a last straw for him.

As the meeting began, Merolla introduced the council’s new attorney, Bill Conley, a state representative for East Providence and a former chief legal counsel for the Rhode Island Ethics Commission.

From that somber note, the tone turned testy.

Merolla next asked Acting City Clerk Lynn D’Abrosca which members of the council had called the meeting.

“I’m not required to record the names of the people who called the meeting,” D’Abrosca replied. “In the past we have never done that, including yourself.”

Merolla pointed out that if he called a special meeting, it would just be him calling it with no one else required to participate. He added that he was asking the question to establish that the charter had been followed, and that the meeting had been legally called.

As Merolla began to continue explaining his question, D’Abrosca interrupted him, reciting the names of the council members who had called the meeting: Timothy Howe, James Mcelroy, Anthony Sinapi, Donna Travis and Stephen McAllister.

Merolla next asked each member of the council if they had been served by a constable notifying them of the meeting.

“I was not served,” McAllister said.

“And I know that Ward 2 (Councilman Jeremy Rix, not present, who had been on an airplane at the time the others were notified) was not served,” Merolla said, because he had checked with him. Rix confirmed Friday night that he had not been served by a constable before boarding the plane.

“I would be very concerned about proceeding with a meeting in what the record shows that the (notice of members) requirement has not been met,” Conley said.

“Mr. President, I have a motion to adjourn for failing to meet the requirements of the charter unless there is proof that there had been a certificate of service by a constable,” said Councilman Richard Corley. The motion received loud applause from the audience.

“If we do not meet the requirements of the charter, I do not believe it’s legal to go forward. I am all in favor of having a special meeting,” Corley said, but he said it should be done with all nine members of the council, with proper notice.

“I’m going to follow the advice of the City Solicitor and declare the meeting invalid,” Merolla said.

After the meeting, Conley said the earlier Finance Committee meeting, which is governed by different rules, had been properly called.