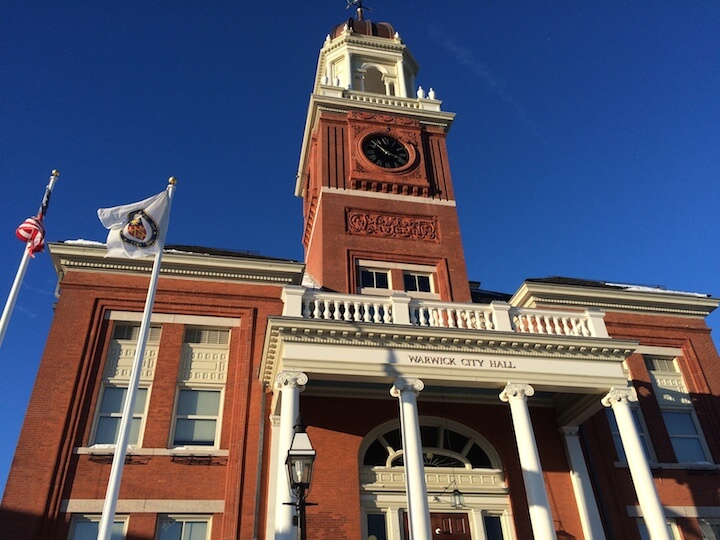 Howe, a high school teacher, the chairman of the Council’s finance committee and the moderator for the public comment on the matter, refused a Councilman’s request to question Finance Director Peder Schaefer about voters’ concerns and then spent several minutes repeatedly interrupting Warwick resident and frequent city government critic Rob Cote as he attempted, and managed with obvious effort, to maintain his patience with Howe for more than 10 minutes.

“This project will have a significant impact on our taxes, therefore the majority of the City Council believed the taxpayers should decide if this is the right plan for the City,” Council President Steve McAllister wrote in a statement about the vote Tuesday.

Members of the public expressed worry over that impact. Warwick City Finance Director Peder Schaefer explained the annual debt service on the $350 million bond, once the entire amount was issued, would be $13.1 million, down about $300,000 since his last estimate three months ago, he said.

Schaefer said he has also calculated the debt service on a $56 million bond approved in 2020 which has not been issued yet. “That will be about $2.9 million dollars, a year,” Schaefer said.

Schaefer said it’s likely those bonds will increase the city’s tax rate, as will, he pointed out, normal operating costs of the city.

“Under the best of circumstances, they wouldn’t be material. But that would be assuming all things work right,” Schaefer said.

Schaefer also said that while the entire $350 million debt service would be $13.1 million, that won’t all be dealt with in a single year. For the first three years, for instance, he estimated, the city will issue $108 million from the bond starting in FY24.

Councilman Ladouceur asked Howe if he could ask some more questions of Schaefer based on his and concerned voters comments.

“Do you mind if we just get through the public comment, and then we can follow up with the director? He’ll be here,” Howe said.”

That pledge did not pan out.

Rob Cote was next up, and Howe interrupted him after he stated his name and ward.

“Maybe just to follow up …” Cote began, before Howe interrupted.

“And hopefully no interruptions when we’re trying to make a good point. Thank you,” Cote replied before continuing.

That request did not pan out.

Cote then read from the latest fiscal note from the school department, which noted the full impact on the budget from the debt will not be realized until FY27, with annual debt service of $13 million from the high schools bond and $2.9 million annually form the 2020 bond.

Cote continued to explain his opposition to the bond, saying that people have not been well informed about the impact . He also said he is concerned because when the stage II application for the high schools bond was passed Feb. 27, no member of the council had examine and vet it.

“Contained within there was a lot of financial…”

“Mr. Cote, if you could stay away from the assumptions, and just, you’ve already said you’re against it. If you can just continue without including assumptions,” Howe interrupted again.

“It’s actually not assumptions. I have emails and…”

“Mr. Cote. Stay away from the assumptions and continue with your statement or your questions.”

“I don’t understand what assumptions you think I’m making. I’m not making any assumptions. I’m speaking about fact on a document. And the fact was…”

“Point of clarification,” Councilman Anthony Sinapi interrupted Cote, “You know nothing about my knowledge of the phase II documents.”

“You have no emails from me stating my knowledge on the phase II documents,” Sinapi said. Howe asked Sinapi to address his input through the chair, and then asked Cote to refrain from making assumptions about all the council members.

“I found some things in there to be very disturbing. One of the things I found on page six, section four, was a $50 million error in the amortization schedule…” Cote began.

“So Mr. Cote, I’m going to interrupt again. We had discussion and a vote on the authorization of the order of the construction and the items that were brought in. Now we’re voting on whether this would go to the General Assembly to be voted on by the public. So I’m just asking if you could stick to that,” Howe said.

“So what I’m trying to do, if I’m not interrupted, is to give you the reasoning why I don’t feel as though, in my opinion that it should go to the General Assembly to be voted on. And that’s what we’re here to make comment on. Here’s why I don’t feel, as a construction professional, why this body should bring it to the General Assembly to let the voters vote on it. And those reasons are…”

“Mr. Cote, so the first, a few weeks ago, we had the vote on the proposal. We had a presentation. They came with a presentation, we had the meeting. Now, that passed. Now, we’re moving on to the bond,” Howe said.

“Right. And that’s what I’m trying to speak about, Mr. Howe, but you just continually interrupt me. I can’t get a sentence out without an interruption.”

“I’m trying to redirect you,” Howe said, speaking over the last part of Cote’s sentence,” And refocus you that we’re talking about sending this. So you stated you do not support sending this to the General Assembly.”

“And I’m trying to give you the reasons why I do not support it, but you’re not letting me do that.”

“You had opportunities to do that so what I’m going to ask you to do is again, just, you said you don’t support it because of numerical errors.”

“Nuh, No, Mr. Howe, you really have to let me get a sentence out and maybe if you do, you’ll understand why I don’t want to support it. That’s the issue I’m trying to make.”

“We had a very detailed system, and process that we went through,” Howe said.

“We didn’t have any system where we could come before you to tell you why we either support or not support this resolution. So I’m speaking specifically on why I don’t support the resolution. So you’ve got to let me get my point out.”

“This is the resolution to send it. You’re talking about stuff that was already spoke of,”

“No, I’m talking about sending this to the General Assembly for the voters to be able to vote on it. I’m telling you why I don’t want, I don’t think that should happen.”

“It’s very frustrating getting interrupted so much, because you lose your train of thought. So if you’ll bear with me. It’s…”

“Well, maybe you can tell me what I’m going to say next because I’m trying to get it out but you just won’t let me speak,” Cote said.

“What I am asking you to do is to speak specifically. So you said that there’s concerns you have. I’m asking you to tighten up and explain,” Howe said.

“I’m trying to do that, but you actually have to let me speak. So, I don’t think that this should go before the General Assembly for the voters to vote on it because the voters have not been exposed to all the facts. The voters have not seen the actual cost ramifications. The voters have not seen how a project of this magnitude under a municipality will directly affect their tax dollars. I can tell you being involved in these projects, I’m involved in one now that’s a $293 million project of a high school. It’s been under construction for three months. Three weeks ago, it was $23 million dollars over budget. As of Friday, it was $28 million over budget. The commodities escalations now, are such that if you’re not in the construction business you have no concept of what’s taking place in the construction business right now. And my concern is that these projects very, very seldom come in on time and on budget,” Cote said.

“Cost estimates are changing by the week,” Cote said. “The problem we’re having is we’re having major assumptions with these fiscal notes, well, this best case scenario, or this is the worst case scenario, but there’s no answer to that in terms of how much it affects the tax dollars of the taxpayers on their property taxes. And that’s what people need to know. And I was told before that there’s going to be ample opportunity to educate the public and there’s going to be meetings held in all the wards to tell them exactly what’s going to take place and how we’re going to move forward on this and what the financial ramifications are. We’re putting the cart before the horse. We’re going to send it to the General Assembly, in my opinion, this is a default position from the Council to say, hey, if this thing goes to hell in a handbasket real quick, the Council can always come back and say, ‘Hey, we gave it to the taxpayers, they voted on it.’

Cote said that, from his read of Schaefer’s fiscal note, the city will need to come up with $10 million annually that won’t be covered by tax increases or other outside means.

“I’m all for new schools, but this is a project that has the possibility of severe detrimental financial impacts for generations to come. And I only hope that everyone sharpens their pencils, they look at the projections, the cost projections, the commodity projections and then take the time, and we have plenty of time, to hold forums and educate the public so they have the facts so when they go to the polls and when they vote they have data with which to vote for and they’re not voting with emotion.”

Though Howe had pledged to allow Ladouceur to question Schaefer after public comment, the opportunity never presented itself. In fact, Howe noted his concerns about time throughout the balance of the meeting and urged following speakers to keep their comments brief.

The council approved the resolution to ask the General Assembly to put the bond on the ballot, 7-1, with Lacouceur voting against.