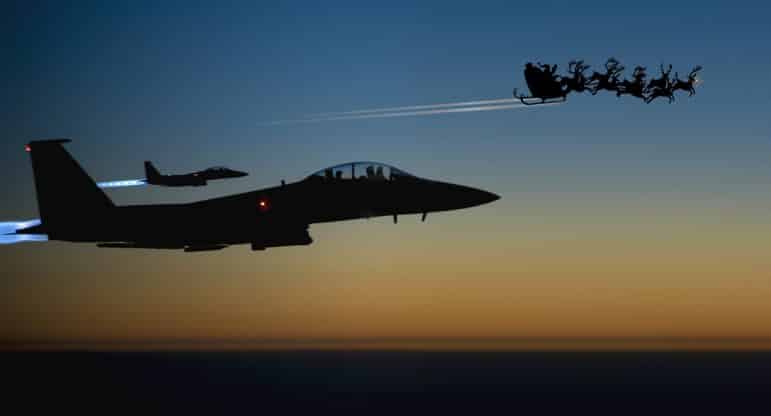 As of 7 a.m., Saint Nick was flying over McMurdo Station in Antartica, headed toward New Zealand, NORAD reports. While there’s already a light snow covering in Rhode Island, NWS warns Christmas will bring hazardous icy conditions to the roads starting at 1 a.m. Freezing rain, with a light glaze of ice on the roads, will be a concern for Rhode Island, northern Connecticut and eastern and southeastern Massachusetts early Saturday, lasting till 10 a.m.

Children speculate on the whereabouts of Kris Kringle each Christmas Eve as months of anticipation near their Christmas Day crescendo. NORAD, the The North American Aerospace Command, has been helping them zero in on the Jolly Old Elf’s airborne sleigh and eight tiny reindeer, with Rudolph leading the team, since 1955.

The 66th NORAD Tracks Santa mission includes the website, social media channels, “Santa Cam” streaming video and a call center that will be operating around the clock on Dec. 24. More than 1,400 volunteers are expected to join NORAD on Peterson Air Force Base in Colorado Springs to help track Santa’s journey, the agency reports.

Starting Dec. 24, website visitors can watch Santa make preparations for his flight. NORAD’s “Santa Cams” will stream videos on the website as Santa makes his way over various locations. Then, starting at 6 a.m., trackers worldwide can speak with a live phone operator to inquire as to Santa’s whereabouts by dialing the toll-free number 1-877-Hi-NORAD (1-877-446-6723); by sending an email tonoradtrackssanta@outlook.comor by following the official NORAD Tracks Santa social media channels.