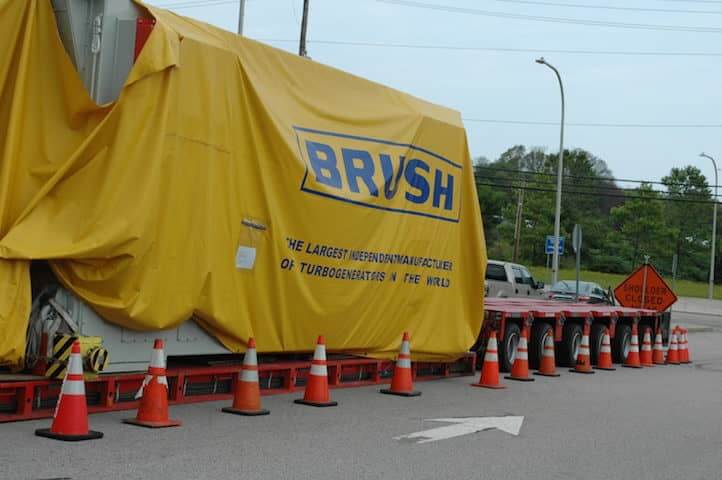 WARWICK, R.I. — A 161-ton generator hauled by a truck the US Army uses to move tanks halted on Rte. 95 in Warwick Tuesday then moved to the Rte. 117 park & ride Friday will stay there till RIDOT officials determine precautions necessary for it to continue to General Electric in Medway, MA.

Transport of the generator, one of 19 pieces of equipment ordered by General Electric, began before RIDOT issued the required permit due to a misunderstanding between engineers hired by the hauler, Bay Crane of Smithfield, and the department, said John Tassoni, owner of The Sentinel Group, spokesman for Bay Crane.

RIDOT spokesman Charles St. Martin said a member of the department spotted the truck on the highway and brought it to their attention on Tuesday. Bay Crane had begun the permit process to clear the move, but had not been cleared yet, he said.

St. Martin noted Bay Crane’s route would’ve taken the truck, trailer and generator cargo over 35 bridges through Rhode Island, many of which are structurally deficient.

“You could have had some sort of failure,” on several of the state’s bridges as the truck moved through Rhode Island, resulting in either damage to the bridges or a collapse, St. Martin said.

Tassoni said RIDOT Director Peter Alviti told Bay Crane there were five bridges on their route in particular the department was concerned with.

St. Martin said the generator was transported by ship to Quonset before Bay Crane hauled it to Warwick. To go forward, he said, the department must select the best route, then assess the bridges along it, and determine if they will need additional support to move the generator over each bridge.

Tassoni said General Electric is expecting the rest of the 18 pieces of equipment they ordered to follow this one, so Bay Crane is working hard to clear a route and system to move the generator. St. Martin said assessing the bridges  and preparing them for such heavy equipment is likely to take significant time. He said he could not estimate how much.

At the park & ride, Jack Romano, a hobbyist from Warwick who had also spotted the heavy equipment on the highway, had noted its parking spot and came armed with his camera.

The truck, an OshKosh M1070 military vehicle, is used by the US Army to haul M1 Abrams tanks, Romano said. The model for the truck is $65, but he’s settling for photos for the moment.

“You don’t see that military equipment in this area because we don’t have tanks in Rhode Island,” he said.