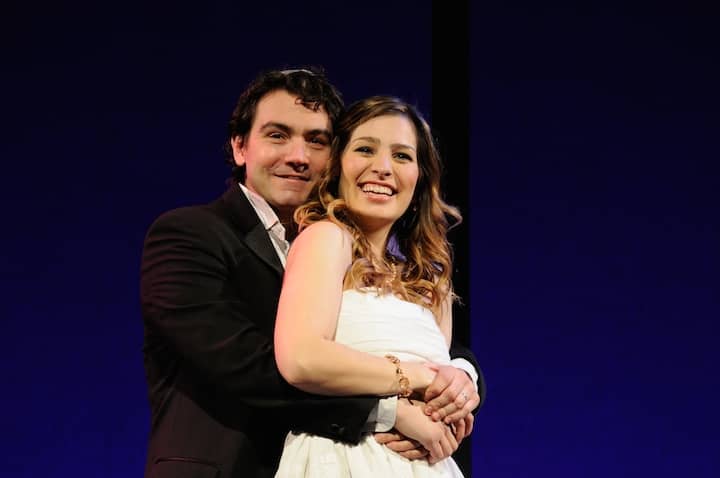 Warwick, RI – Once again I had the pleasure of attending opening night at Ocean State Theatre Company. This time my wife and I enjoyed “The Last Five Years,” a play written by Jason Robert Brown, directed by Joel Kipper and staring Alyssa Gorgone as Cathy and David Demato as Jamie.

“The Last Five Years” is a chronology of Jamie and Cathy’s relationship told by both of them, but from different perspectives. Cathy reveals their five years together by starting at the end, while Jamie starts at the beginning. Naturally, the only time the two of them appear in a scene together is their marriage, which occurs roughly half-way through the performance.

The musical opens with Cathy lamenting the failed ending of her 5-year relationship with her husband Jamie. At the same time,Jamie portrays his over-the-moon feelings for the girl (Cathy) that he just met. The songs, composed by the playwright, are sometimes playful, sometimes poignant, reflecting the different stages of the relationship.

I have heard “The Last Five Years” described as an emotional “roller-coaster.” The analogy that I would use is more like two people bungee jumping side by side, but not in unison. I’ve never bungee-jumped, but assume it goes something like this:

Intense fear that you’re about to do something incredibly stupid, followed by convincing yourself, with the help of friends, that you’ll be fine. The decision to jump and the instant terror of falling, followed by the immediate joy when the cord stops you and pulls you back.

Jamie and Cathy are like two bungee jumpers who leap at different times, never in sync, never on the same emotional page. Throughout the play you see them continually passing each other by, each needing something from the other that they can’t provide because they are going in different directions.

We watch as Jamie, a writer, sees his career gaining speed as the play progresses, while Cathy, an aspiring actress, is stuck in neutral. There are hints of jealousy and an underlying theme of “growing apart”, but the writing, and the emotion that the actors bring to the stage hit just the right cords to keep this from being just another story of love, decline and divorce. Even those who have never been divorced can easily relate to the struggles portrayed by Jamie and Cathy.

At the beginning of the play, (the end of the marriage for Cathy), she sings that “Jamie has new dreams now.” Meanwhile, Jamie, at the end of the production (the end of the relationship for him), proclaims, “I wrote a story, but we changed the ending.”

This is a wonderful performance by two talented actors. It is also a cautionary tale of how easy it is to allow careers to take priority over our dreams and even those we love. Anyone who has ever been in a relationship has struggled. All of us can relate to “The Last Five Years” and see a little of ourselves in it.