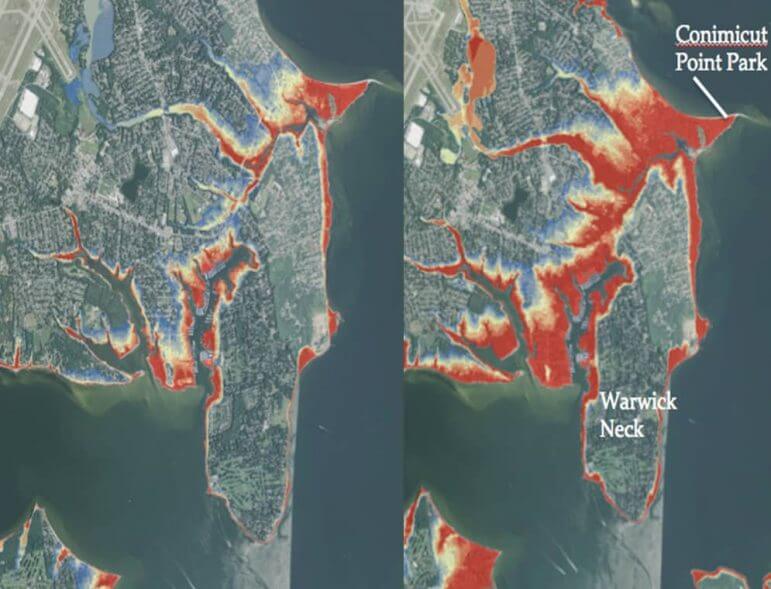 WARWICK, RI — In the event of a 100-year storm, the Rhode Island Coastal Resources Management Council predicts parts of West Shore Road would be under water, effectively turning the Warwick Neck neighborhood into a temporary island, a local example of the need for coastal infrastructure investment Sen. Sheldon Whitehouse and the RI Congressional delegation is asking for with Mayor Scott Avedisian’s support.

“Rhode Island’s infrastructure needs a lot of investment to get back to a healthy state, let alone to prepare for rising seas and increasingly severe weather,” said Senator Whitehouse, a member of the Senate Environment and Public Works Committee.  “We are the Ocean State, and our way of life and economy rely on critical infrastructure in coastal communities like Warwick.  Investing in infrastructure is a bipartisan issue, and I look forward to working with my Senate colleagues and the administration to create jobs, ensure safe roads, protect our communities, and lift the economy.”

Scientists predict the need for such investment is likely to increase through the next several decades.

According to the National Oceanographic and Atmospheric Administration (NOAA), global sea level has been rising over the past century, with the rate increasing in recent years. In 2014, global sea level was 2.6 inches above the 1993 average. Sea level continues to rise at a rate of about one-eighth of an inch (3.2 mm) per year, due to a combination of melting glaciers and ice sheets, and thermal expansion of seawater as it warms.

Higher sea levels cause storm surges to push further inland than they once did, causing more frequent nuisance flooding. Nuisance flooding is estimated to be between 300 percent to 900 percent more frequent within U.S. coastal communities than it was 50 years ago, NOAA reports. Hundred-year flood events, such as the 2010 flood which struck Rhode Island and dealt the City of Warwick a harsh blow, are expected to become more frequent due to climate change and sea level rise, researchers from MIT and Princeton University predict.

In 2012, NOAA scientists concluded there is a greater than 90 percent chance that global mean sea level will rise between 8 inches and 6.6 feet by 2100. In March of this year, the Washington Post reported scientists published a study in the Proceedings of the National Academy of Sciences predicting the rate of sea level increase could double to 1/4 inch (6 millimeters) per year by 2040, accelerated by melting in Greenland and Antarctica.

President Donald Trump has called for $1 trillion in infrastructure spending.  In January, Senate Democrats proposed a $1 trillion infrastructure improvement blueprint,which would rebuild and reinforce infrastructure while creating jobs in Rhode Island and across the country.  The blueprint contains $25 billion for upgrades to make communities more resilient to natural disasters and climate change, including funding for the National Oceans and Coastal Security Fund.

“As a coastal community with more than 39 miles of coastline we fully understand the importance of safe and secure infrastructure in our city and throughout the state,” said Mayor Avedisian. “I fully support Senator Whitehouse’s work as he aims to bring national attention to some of our most dire roadways and bridges across the state. As the Senator, along with his Congressional colleagues, work to pass legislation, it is my sincere hope that with potential funding we are able to make smart, long-term investments into our infrastructure and ultimately the future wellbeing of our communities.”

“We have the programs in place to effectively deploy funding at the state and local level to help address these needs.  We need the President to work with us to put real money into them,” Reed said.