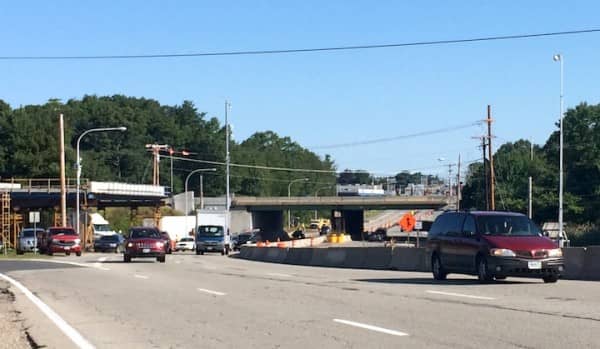 Warwick, RI – Traffic moved smoothly past Exit 8 on Rte. 95 at the end of Monday morning’s commute while construction on a new bridge over Rte. 2 continued, with live RI DOT cameras pointed at the action. In the coming days, the state’s contractor,  D’Ambra Construction of Warwick, will move the bridge, in two sections, into place using self-propelled modular transporters (SPMTs), each capable of moving more than 3,500 tons. The SPMTs will carry the new Barton Corner Bridge segments into their final position, with the public DOT cameras catching the move.

Construction of the two bridge segments is under way to the north and south of the existing bridge. Placement of structural steel is complete, and prep work is underway for building forms prior to pouring the concrete bridge decks, according to the DOT’s website. The state’s cameras will remain live throughout the project, allowing the public a view as the sections of the span are moved into place.