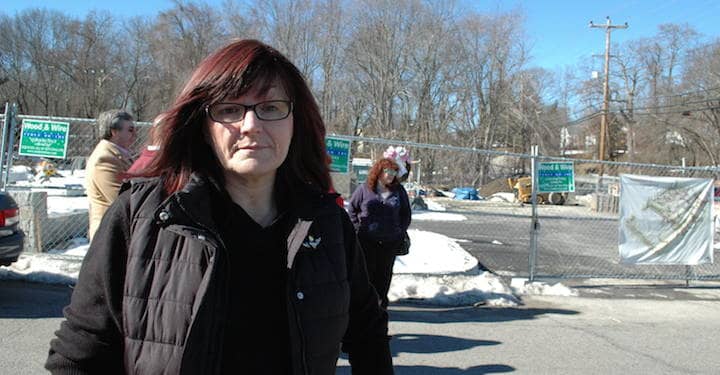 WEST WARWICK, RI — About a dozen people gathered Monday morning at the site of the 2003 Station Nightclub Fire on Cowesett Road Monday for a brief prayer in memory of the 100 lives lost in the tragic event and a review of  the memorial construction, which some hope will also be a lasting reminder to observe fire safety building codes.

Father Robert Marciano, Warwick Fire Chief James McLaughlin, fire safety advocate Dave Kane, and Station Nightclub Fire survivor Gina Ruso, co-chair of the $2 million capital campaign to build the memorial, were among the attendees during the brief recognition of the 14th anniversary of the Station Fire.

Gina Russo, a survivor of the blaze, now the co-chair of the memorial’s capital campaign, said the progress on the site by landscaping and masonry contractor Yard Works of Warwick has been moving at an inspired pace. Work continued even during the recent snow storm, she said.

“You come here and you can see the mason, he’s just doing his thing. Loves it and what he’s doing,” Russo said.

While the capital campaign did reach its $2 million goal, Russo said, about $650,000 of that was through in-kind donations which have not panned out.

“So we’ve had to use the cash that we had to go forward with the building of the memorial,” Russo said.

So, she said, the capital campaign is continuing in hopes of raising at least another $120,000. After that, Russo said, additional fundraising will be needed to maintain the site. How much maintenance will cost won’t be clear until the memorial is finished, she said, when the landscaper can assess everything that needs to happen to keep up the area.

The site will also need to be entrusted to a long-term caretaker agency or organization, she said.

“At some point, we have to figure out who’s going to take this over,” Russo said.

Kane’s son, Nick O”Neil, 18, was the youngest person to die in the fire. In the years since, he’s become an advocate for stricter fire safety laws and adherence to existing laws governing fire safety inspections.

He said that while it’s important to remember the people who died in the fire and the lives changed by the tragedy, it’s more important still, because of them, to mind the lessons it taught about the consequences of not following fire inspection regulations.

There are still people who don’t take the enforcement of fire inspection regulations seriously, Kane said.

“So we still need to press on,” he said.

Russo, who lost her boyfriend, Fred Crisostomi, in the fire, agreed the Station Fire demonstrated that fire regulations should be strictly enforced.

“We can’t ever let this happen again in Rhode Island,” Russo said.