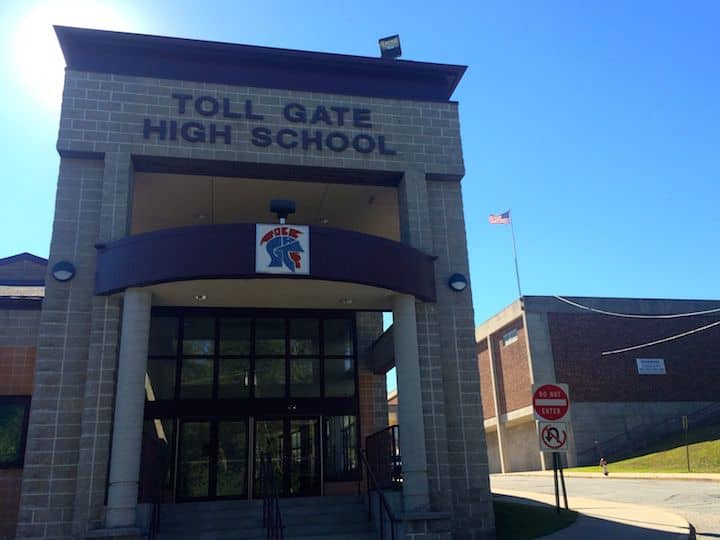 WARWICK, RI — Warwick Schools will end 2016 with a $191,000 surplus, may lay off 31 teachers, and will spend the next two summers repairing Warwick Veterans Jr. High’s HVAC system, starting with the most fragile parts, largely in administrative offices.

Those were among the items the Warwick School Committee and school officials shared with the public Tuesday night at Toll Gate High School’s auditorium.

School Finance Director Anthony Ferrucci told the School Committee that the department will end the 2016 fiscal year with $191,000 surplus, due to adjustments on salaries and fringe benefits. After the meeting, Ferrucci explained that the surplus was the result of staff that had left or retired unexpectedly this year.

The School Committee also voted 4 to 1 to lay off 31 teachers, with Committee member Karen Bachus voting against.

During public comment, Winman School English teacher Terri Bozigian noted that her classroom had been measured for new Promethean interactive whiteboards, as well as other additions. “It seems the only component the school department is unable to afford is me,” said Bozigian, a former journalist who pursued teaching as a second career.

Warwick Teachers Union President Darlene Netcoh noted the layoffs, which she said had already been communicated to the teachers affected, would effectively decimate the guidance department. The staff shrinkage is also in violation of the state’s Basic Education Program (BEP).

Netcoh said she gave the Committee credit for not exceeding the 40 teacher layoff limit from the expired teachers contract, although the department is under no obligation to continue following that limit, according to a recent court decision. Netcoh noted that although the layoffs may not happen if the school department is able to win the funding it’s asking from the city this year, the staffing priorities demonstrated by them are not wise.

“These thirty-one lay-offs reflect draconian cuts in programs, such as in elementary reading; the elimination of the elementary guidance program; and the elimination of content positions in the secondary schools. These lay-offs have negatively impacted teachers from K-12. If the Warwick School Committee is concerned about level-funding from the Warwick City Council, then before they lay off teachers, they need to excise superfluous parts of the budget that do not directly impact students’ instruction, such as the costly and always-expanding central administration, the public relations firm, and the law firm to which the district has paid approximately a half of a million dollars,” Netcoh said.

Director of Buildings and Grounds Steven Gothberg outlined coming repairs to Warwick Veterans Jr. High’s heating and air conditioning (HVAC) system, the $8,633,000 bid for which was awarded to Ahlborg Construction in Warwick.

The work will be conducted in two phases during each of the next two summers, the first of which will include the building’s guidance, locker rooms, offices and some classrooms. During the next school year, Gothberg said, they’ll continue as much of the work as possible without disturbing classes, such as work required outside and on the roof. Work on the second phase, which will cover the remainder of the classrooms, will start the following summer.

Gothberg said the timing of the repairs is not how he would like to do the work, but it’s starting on the area of the building’s heating system that is most likely to fail. Gothberg said the steam lines in the first phase of the repairs are not only focused on the most fragile areas of the system that are regularly breaking down, but that part of the heating system has pipes and steam lines that are extremely inaccessible and would force him to shut down the school if they broke.