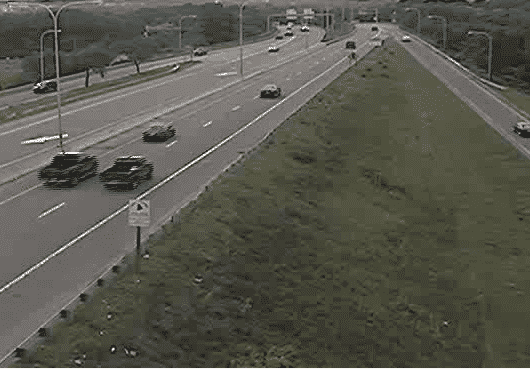 WARWICK, RI — RIDOT will install a Rte. 37 lane shift on the right for westbound traffic starting Friday night, Feb. 26 at 8 p.m., part of a $3 million project to make a several safety improvements for Rte. 37 close to its intersection with Natick Avenue in Cranston.

The shift will be in place for approximately three months. In this time RIDOT will construct a new section of Route 37 westbound that will include a curve in the roadway that will encourage drivers to reduce speed as they approach the end of the limited access highway and traffic signal at Natick Avenue.
This location has had a high number of crashes, most of them from people failing to reduce their speed and stop at the end of the highway. From January 2015 to February 2021 there were 38 run-off-the-road crashes (running through the light and the guardrail, onto private property) and 44 rear-end crashes at the light.
The project includes a slight realignment of the ramp from I-295 southbound to Route 37, which also will feature a slight curve that will encourage drivers to slow down. A new signal with two left turning lanes onto Natick Avenue southbound and additional advance warning signs will be installed under this project.
RIDOT has taken a number of steps in past several years to improve safety at the end of Route 37 including adding signs with flashing beacons, setting grooves in the pavement, striping changes and lowering the speed limit. RIDOT expects to complete this latest project in early summer 2021.
The safety improvements on Route 37 westbound are made possible by RhodeWorks, RIDOT’s ongoing commitment to repair structurally deficient bridges and bring Rhode Island’s transportation infrastructure into a state of good repair, promote economic development, and create jobs. Learn more at www.ridot.net/RhodeWorks.