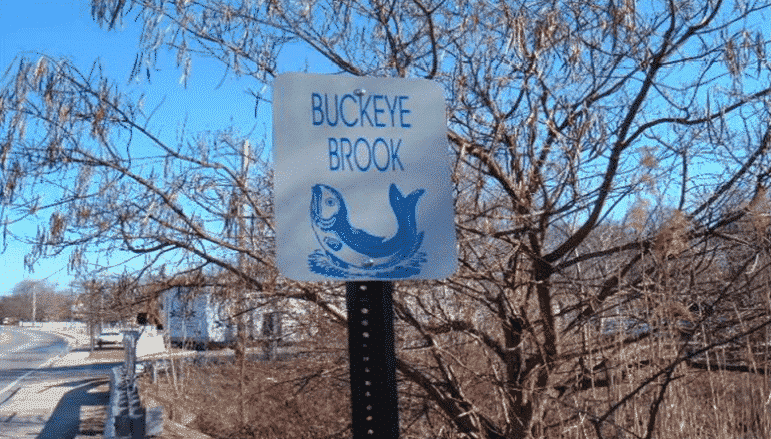 According to an announcement from RIDOT, the agency will rebuild and expand the two water quality basins on the north and south sides of the brook. The basins have become overgrown with vegetation and have reduced capacity from accumulated sediment and debris from stormwater runoff. The new ponds will accept diverted stormwater and filter it through soil and plant materials to remove pollutants before it discharges into the brook.

The new system will capture the first inch of rainfall, also known as the “first flush,” which typically contains the most pollutants and sediment. The project captures stormwater from a 31-acre watershed area and will effectively reduce 9.9 acres worth of runoff from paved, also known as impervious, surfaces.
“This project is but one of dozens of stormwater improvements we’re doing over a 10-year period to reduce the impact of stormwater pollution on our rivers, lakes, streams and beautiful Narragansett Bay,” said RIDOT Director Peter Alviti, Jr.
“These are the types of watershed restoration and stormwater improvement projects which we advocate for and support,” said Michael Zarum, president of the Buckeye Brook Coalition, which is the RI Rivers Council’s official State Designated Local Watershed Council for the Buckeye Brook and its watershed. “This project for stormwater flowing into Buckeye Brook absolutely meets goals for new green infrastructure, design requirements in the latest edition of the RI State Stormwater Design Manual, and stormwater best management practices.”
The project is funded as part of RIDOT’s 10-year, $110 million commitment to come into compliance with a 2015 consent decree with the Environmental Protection Agency (EPA). It mandates that RIDOT gets into compliance by treating pollutants in stormwater from all state roads and keep the whole system clean and maintained. RIDOT is responsible for a massive and complex system of catch basins and pipes that exists under Rhode Island’s road network – about 35,000 structures – that haven’t been adequately maintained for years.
According to the Buckeye Brook Coalition, the following improvements will be made:

The existing wetlands on site will not be altered as part of the proposed project.  However, there will be work that falls within the 100-foot riverbank wetland for Buckeye Brook, the 50-foot perimeter wetland for the wooded swamp and the two Areas Subject to Storm Flowage (ASSF).  Sediment and erosion controls have already been put in place at the construction site.

The project will also lower the risk of flooding in the area by providing additional watershed storage volume and will reduce peak rates of flow to Buckeye Brook.