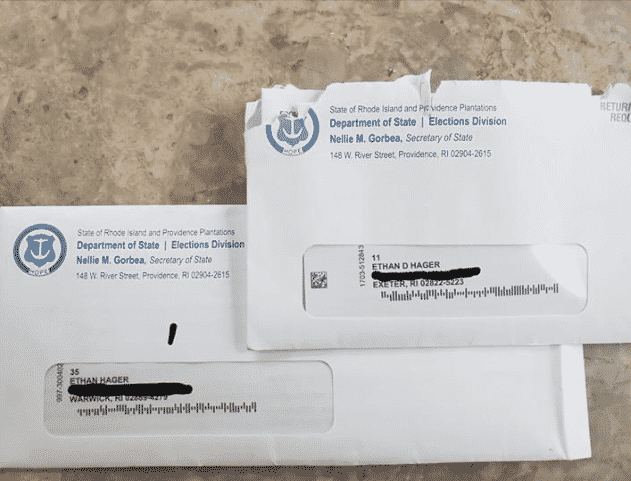 PROVIDENCE, RI — Voters who applied for June 2 Presidential Primary mail ballots are receiving theirs by mail, a system the conservative Heritage Foundation’s study has found no cases of fraud within during the last 41 years, as far back as it searched.

Some have expressed concern about the mail-in ballots, as did former Warwick resident Ethan Hager, who now lives in Exeter. Hager posted dual letters from Secretary of State Nellie M. Gorbea’s office, one addressed to his old Warwick home, the other to his current Exeter address.

“Multiple ballots = multiple votes = voter fraud,” Hager wrote, posting an image of both letters along with his concern.

But Nick Domings, public information officer for the Secretary of State, points out applications and ballots are two different animals.

Domings went on to explain the security checks built into the mail-ballot system.

Further, Domings pointed to a recent study by the conservative Heritage Foundation that found no documented cases of voter fraud in Rhode Island since 1979, which is as far back as the study went. That report also covers 2018, the year that RI’s U.S. Attorney’s office and the local FBI announced their enhanced vigilance against voter fraud in the state.

Also, in 2012, during his re-election bid, Woonsocket native Rep. Jon Brien (D-Dist. 50), who championed voter ID legislation that year that requires voters to show an ID before they can vote, was unable to point to a single case of voter fraud that his legislation would have stopped.

Domings said the Secretary of State is sending all registered voters a mail ballot application for the upcoming presidential primary due to the COVID-19 pandemic. One of the benefits of the mailing is that it will help the office identify names that should be removed from the voter rolls.

“There are strict federal and state guidelines for removing inactive records from the voter rolls. Following these strict laws, Secretary Gorbea has legally removed more than 130,000 outdated registrations since taking office. This statewide mailing will help identify more outdated registrations and will be hugely helpful in maintaining accurate voter rolls. So to anyone who receives an application for someone who no longer lives at their address – please mark it as undeliverable and return it to our office! That’s the first step in legally removing that name from the voter rolls,” Doming said.