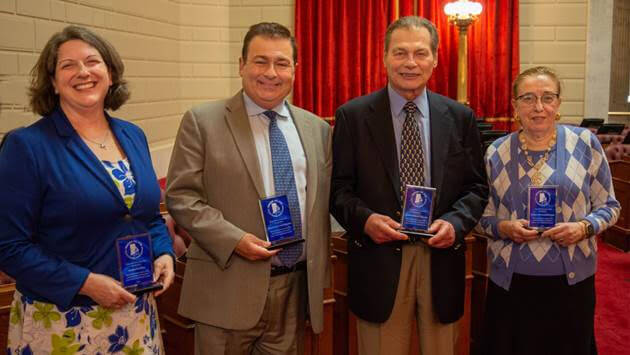 Carson (D-Dist. 75, Newport) and Euer (D-Dist. 13, Newport, Jamestown) were honored for sponsoring the legislation, and Shekarchi (D-Dist. 23, Warwick) and Ruggerio (D-Dist. 4, North Providence, Providence)were honored for their work on the landmark Act on Climate (2021-S 0078A, 2021-H 5445A), legislation enacted last year to create an enforceable commitment to reduce all climate emissions from transportation, buildings, heating and electricity in Rhode Island to net zero by 2050.

“The Rhode Island Clean Water Association created the Clean Water Legislator of the Year Award to recognize all the hard work involved in getting substantial, effective legislation enacted in support of the water environment. The 2022 awards recognize the sponsors of the Act on Climate. Climate legislation is clean water legislation, as our facilities are dealing with rising sea levels, flooding and storm impacts. Our members hope to play a major role in achieving the greenhouse gas reduction goals established in the Act on Climate,” said RICWA president Peter J. Connell.

Established in 1952, the Rhode Island Clean Water Association (RICWA), formerly the Narragansett Water Pollution Control Association (NWPCA), is a nonprofit organization created to promote the advancement of knowledge concerning the nature, collection, treatment, and disposal of domestic and industrial wastewaters.