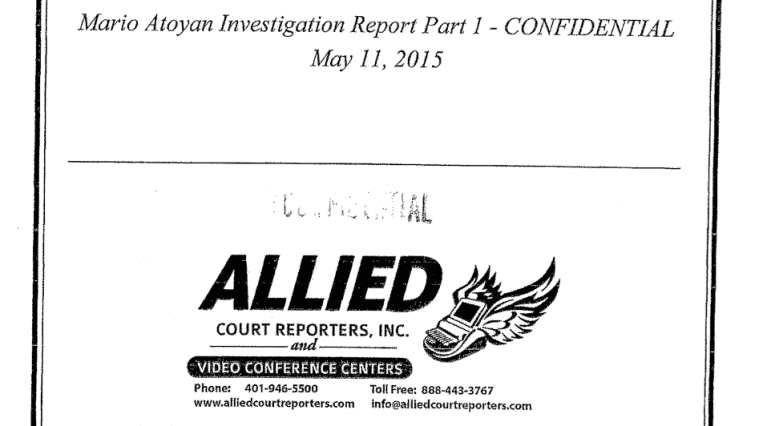 According to the report released today, two young women told Gorton Principal Jeffrey Taylor that Atoyan had used a pen to draw the words “poop” then a doodle of poop, wrote, ‘I love science,” then drew a penis and a penis head on the girls’ arms.

The report also states that Atoyan would refer to one of the girls as “penis head,” would yell the words “penis” and “vagina” in class, and invited one of the girls to the beach after school.

Of the four administrators involved in the investigation, Ragosta, and the parents, credit Taylor alone with taking the matter seriously. Ragosta praised the principal’s diligence and record keeping, considering his lack of experience with such reports.

“I’ll tell you up front I think you have a very fine administrator in Mr. Taylor,” Ragosta told the Committee.

Taylor personally delivered his records on his interviews with the students, parent emails, and notes to Ragosta in Providence. When Ragosta reviewed Taylor’s records, “I said, this is about as good as what any first-year legal associate would put together, or a paralegal. He had everything categorized, organized, and he was extremely detailed. This is the kind of file that I would have expected to see, either duplicated or mimicked, by somebody in your central administration, and it (central administration’s investigatory records) didn’t come close,” the lawyer said.

Atoyan was reprimanded for the incidents, and kept his job until he was arrested March 20, 2015 and charged with sexual assault of a 15-year-old relative in June 2015 in North Kingstown.

Shortly after Ragosta delivered the report, D’Agostino retired, Mullen retired, and Healey was removed from her compliance role, then placed on leave.

Below are summaries on each administrators’ part in the investigation, according to the report. The entire document has been embedded below:

D’Agostino: No notes on allegations, no response to students’ mothers

Despite D’Agostino’s claim that Atoyan had no prior incidents alerting officials he was a safety risk, a parent had reported the teacher drew a picture of male genitals on her 13-year-old daughter’s arm a year prior to his arrest in North Kingstown, according to Turnto10.com.

The Ragosta Report also shows D’Agostino’s claim as inaccurate, detailing D’Agostino’s notification by the mothers of two children about the 2013 drawing incident. D’Agostino did know of the existing allegations, but ignored them, failing to respond to parents complaints about Atoyan, Ragosta told the Committee.

“I’ll go as far to say, and I’ll give you a preview of one of my conclusions, it was dismissed. It was completely ignored by your superintendent,” Ragosta told the Committee.

Ragosta said he spoke to the mother of a 13-year-old girl who had no suspicion of Atoyan up till Oct. 2013, when her daughter reported the teacher’s drawings on her arm and showed them to her.

The mother immediately took a picture of her daughter’s arm, then told her to wash it off, Ragosta said. She didn’t report to WPD, because she wanted to handle the matter internally, and her daughter wanted to protect Atoyan.

“When she told [Gorton Jr. High Principal] Jeff Taylor, he said ‘we can’t just let this go. An investigation had to be done.’ Ragosta said.

But while Taylor recorded his investigation and reported it to his superiors, the Warwick Schools administration only called the mother for a meeting after Atoyan’s arrest was made public and in the media, in 2015.

The mother told Ragosta, “ ‘Now that there’s lurking that has something to do with, perhaps, someone’s job, my story is more important,’ “ Ragosta said.

Ragosta said the mother of a second girl drawn on by Atoyan also never heard from D’Agostino after emailing him about it.

When Ragosta interviewed D’Agostino on May 5, the Tuesday prior to his first testimony to the school committee, the former superintendent said he was “responsible for personnel,” adding “you name it, I get involved with it,” according to Ragosta.

But D’Agostino told Ragosta that he “didn’t have any notes. Not a single note” from the Oct. 4 incident, and that he left the investigation to Mullen “because it was Dennis Mullen’s responsibility.”

After further questioning, Ragosta explained that D’Agostino “started to say that, well, it was a fabricated story,” and said that he based that judgment on what Healey had told him.

D’Agostino also stated that the parents had been uncooperative, and had not wanted to talk to Taylor about the incident, which Ragosta told the school board was “not true at all.”

Mullen: ‘Atoyan is not to be removed’

Mullen, who was then director of secondary education as well as athletic director and head of the department’s Information Technology department, deferred to Healey about investigating the incident and apparently did not speak to anyone except school administrators, according to Ragosta.

Taylor testified that when he informed Mullen of the situation at 8 a.m. on Oct. 7, Mullen responded “you got [sic] to be kidding me” and “was shocked by [Atoyan’s] behavior.”

Ragosta reported that after Taylor spoke with the students and Atoyan during the day on Monday, he contacted Mullen and said that Atoyan should be removed because of concerns for the students’ safety. But “Mullen told him no, Atoyan is not to be removed,” according to the report.

At 2:51 p.m. on Oct. 7, Taylor received an email from Mullen stating that Atoyan would receive a reprimand; asked for his reaction by Ragosta, Taylor replied that he “was surprised” and that he got no further direction from Mullen, D’Agostino, or Healey.

Later in the report, Ragosta explains an interview he conducted with D’Agostino, where the former superintendent said he’d referred a Nov. 1 email from one of the parents to Mullen, but never followed up on it.

From his interviews with Mullen, Ragosta told the school department that he learned Mullen “basically took all of his lead from Healey” and explained that “because they weren’t sure what happened that it was decided that a written reprimand was an appropriate form of penalty.”

The uncertainty Mullen referred to, Ragosta said, was due to what the administrators characterized as “flip-flopping” by the students. However, Mullen, Healey and D’Agostino never interviewed them, Ragosta reported.

At one point, Ragosta quoted his interview with Mullen, where Ragosta asked “So, you deferred to the judgment of your school attorney?” to which Mullen replied: “I did.”

In response to follow-up questions, Mullen said he had not seen the Nov. 1 email sent to D’Agostino, and that, because “he was never aware that… any of these students were uncomfortable encountering Atoyan,” he never revisited the incident.

Said Ragosta to the school board on after recounting that part of Mullen’s testimony: “I’ve never heard of anybody making a decision because they were unsure of what happened.”

When Ragosta asked Mullen whether he agreed with that assessment, Mullen replied: “I concur with that, yes.”

The last references to Mullen appear in the May 21 transcript of Ragosta’s testimony, where he stated that Mullen had given his notice to retire from the Warwick school department, and to a question from the committee, described Mullen as “very pleasant and extremely professional and very, very candid.”

Healey: ‘I did not believe that Mario drew that penis on that kid’

Ragosta told the board that Healey didn’t believe the students’ accusations against Atoyan, leading her to recommend a letter of reprimand over a heavier punishment.

“I said, ‘Don’t you see this as the kind of touching that merits a suspension or termination?’” Ragosta said.

Healy replied that she did not.

“I did not believe that Mario Atoyan drew that penis on that kid,” Healey told Ragosta, according to his report. Healey made that determination, he said, without speaking to any witnesses.

“That was not my job at the time. I was asked for an opinion on what we could uphold in terms of discipline,” Healey told Ragosta.

Ragosta also reported that Healey told him she had not read any decisions of either Superior Court or the RI Department of Education regarding teacher touching cases in preparation for her decision, “Because I’ve been doing this for a very, very long time, and I’m very, very confident in my ability to ferret out levels of discipline.”

Ragosta told the board that as a 36-year veteran lawyer himself, “I was always taught you’re never complacent, and you always read the law, and you have to be a life-long learner in the law. So, I read cases because I want to find out what’s happening, and I get the distinct impression that this was just botched and sloppy.”

Ragosta said he felt the investigation into the allegations against Atoyan were also rushed.

“I think there was a rush to judgment. I think your administration, central administration, should have been much more aggressive in terms of exiting this man from the school based on this evidence.

“I will tell you that legal counsel [Healey] was dismissive about this case, almost to the point of arrogance,” Ragosta said.

Ahearn also said that Healey’s position “puts us in a very unfortunate situation because of all the authority she’s been given.”