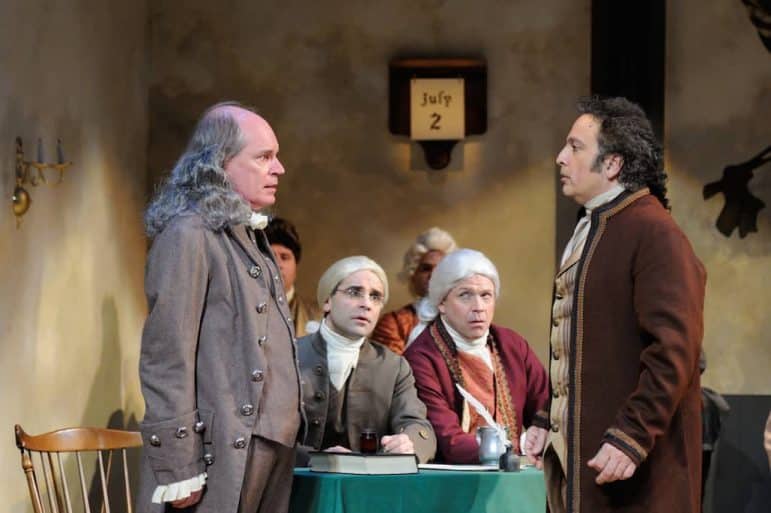 We hold these truths to be self-evident – This is a great play!

I will confess, I am a history buff, so I knew I would enjoy Ocean State Theatre’s production of 1776 The Musical. However, from the opening song, “Sit down John”, to the last signature on the Declaration of Independence, I was thrilled with how absolutely wonderful it was.

Historically accurate, the play is a riveting, behind-the-scenes look at the struggles, hardships, and politics that were all part of the forging of our nation. The dying Caesar Rodney of Delaware (played by John Shuman) who was carried from his death bed back to Philadelphia for the final vote, the young Jefferson (played perfectly by Roger Reed), newly married and separated from his bride for months on end, and the representative from South Carolina, Edward Rutledge, (performed with wonderful malice by Joe Depietro) are just three of the stand out performances.

Another crowd favorite, at times more interested in his rum then the proceedings taking place in the hall, was the representative from Rhode Island, Stephen Hopkins, played by Tom Gleadow.

The fact that this is an election year adds a sense of immediacy to the performance. The more things change, the more they remain the same is evident from the very beginning of the play when John Adams says, “I have come to the conclusion that one useless man is called a disgrace; that two are called a law firm, and that three or more become a Congress!”

The frequent communiqués from General Washington, delivered by courier and read aloud to the Continental Congress, are frequent reminders of the frailty of the yet un-born nation and the overwhelming odds they face. At one point, the young courier (played by Grant Whitney) is asked if he has seen any action. In reply, he sings a heart-breaking lament recalling the death in battle of two of his friends and their mothers’ search for their bodies.

The nature of the subject restricts most of the cast to men, but the two women who are present manage to bring a different perspective to the events. Abigail Adams, (played by Alison Mahoney) although never actually present in Philadelphia, comes on stage several times to “talk” with her husband John through the constant flow of correspondence they maintained while he was away. Her consul and reassurance helped to keep her husband grounded. Martha Jefferson, (played by Sarah Pothier) is the very picture of young love as she made the treacherous journey from Virginia to be with her husband.

The set, staged as Constitution Hall in Philadelphia, remained true to the time and the hardships of the Congress, as they frequently had to choose between opening the windows against the oppressive summer heat, or keeping them closed to prevent swarms of flies from driving them mad.

Congratulations to Joel Kipper who directed and staged the play and to music director Esther Zabinski. True to their vow, OSTC continues to use professional musicians whenever staging a musical.

1776 is an accurate, funny, moving re-telling of possibly the most pivotal point in American history. Playing at the Ocean State Theatre Company through March 13.

I highly recommend it.

For the full performance schedule, and to purchase tickets, visit www.OceanStateTheatre.org or call (401) 921-6800.