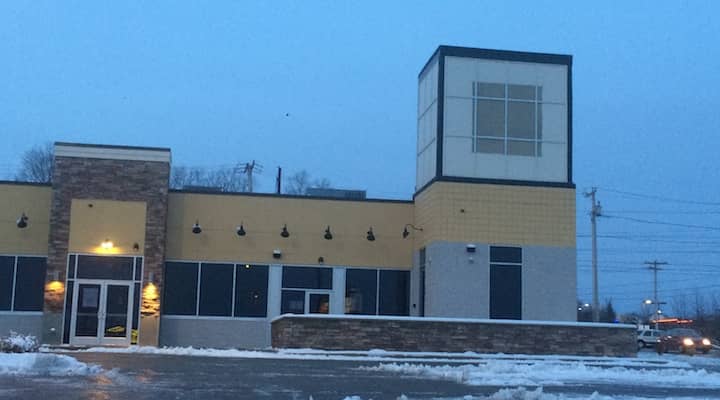 WARWICK, RI — Pepe’s Pizza, or Frank Pepe Pizzeria Napoletana, if you’re standing on ceremony, is opening its 10th location at the site of the former Corner Bakery Cafe, 21 Universal Blvd, choosing Warwick after a long search thanks to an amenable landlord and the city’s up-and-coming reputation.

The restaurant will be the brand’s first location in Rhode Island, part of a conservative expansion plan led by Gary Bimonte, grandson to founder Frank Pepe who opened the company’s first pizzeria in New Haven in 1925.

Bimonte said the new space is a little larger than the company usually aims for with new locations at 4,800 sq. ft. Normally, a Frank Pepe Pizzeria is 3,500 sq. ft. He said they’ll remodel the entire building, and keep the excess in reserve for future expansion. When it’s finished, the restaurant will have 90 seats, Bimonte said.

They’re aiming for a May 1 opening, which will require installing an HVAC system and building the oven (modeled after a blueprint of the original) that will cook their pizzas and produce the signature char on the crust that regulars to Pepe’s Pizza will remember.

With the HVAC installed, they’ll begin work on the oven, which will take about six weeks. Once built, the oven needs to be lit and fired up to dry it out before seasoning the oven in the fourth week. Bimonte said he’ll be making a visit to supervise the progress on the oven, the backbone of the company’s success.

Seasoning requires firing up the oven with lard and port remnants inside, allowing the bricks to absorb the flavors. The seasoning adds flavor to every pizza cooked in the oven, he said. Without the seasoning, the first pizzas would come out of the oven like bricks, he said.

With a seasoned oven, the pizzas emerge with that char on the edges and a tasty crust unique to Frank Pepe’s Pizzeria.

“Some people think it’s burnt, but it isn’t,” Bimonte said.

The company has had designs on a new location in Rhode Island for some time, Bimonte said. For a while, they were looking for sites in Providence, but nothing stood out as a good option. Later this year, Bimonte said, they were torn between Cranston and Warwick locations. Warwick won in the end, he said, largely because the landlord seemed an easier fit to work with.

Also, “We just knew that Warwick is an up and coming area,” Bimonte said.

Rhode Island marks the fourth state the company has opened shop in since 1925, Bimonte said, adding to Connecticut, Yonkers, New York and locations in Newton, MA. Soon, he said, they’ll also open locations in the DC metro area. Eventually, he said, he’d like the company to have 40 – 50 locations in New England. But the expansion is slow-going, given the carefully laid plans involved with each new spot.

To date, the family-owned company (not a franchise) employs about 500 people, and will employ 30 people at the Warwick location.

“The family is excited and happy to be entering into the Rhode Island market,” Bimonte said, adding a thought for his grandfather.

“I hope he smiles down on us and is happy with what we’ve accomplished,” he said.