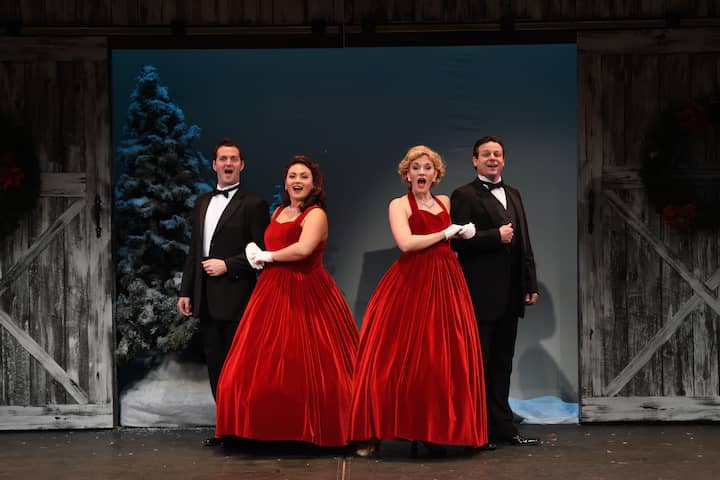 WARWICK, R.I. — Before Ocean State Theatre moved to Warwick on Jefferson Boulevard, artistic director Amiee Turner set her sights on “White Christmas,” and vied for rights to the show for four years before landing it for their 36th production — a well-performed dose of holiday cheer and songs marshaled to save a flagging Vermont inn — with a lot of heart, a surprise flip, and a nod to local Rhode Islanders.

“White Christmas is really the reason we ended up in Warwick,” Turner told the crowd during opening night for the performance. While the company was based atTheatre by the Sea, there was really no opportunity for a holiday show, so Turner had already been looking for a second location, and had discovered the old auto dealership when OSTC needed a new home.

The musical adaptation of the beloved film of the same name features seventeen Irving Berlin songs, including the tap-dancing, high-energy “Happy Holidays”, and an entertaining bit of romantic foreshadowing during “Love and the Weather” with the male and female halves of the story’s main love interests nicely done by Nate Suggs, as Bob Wallace, Joel Kipper as Phil Davis, Stefani Wood, as Betty Haynes and Maria Logan as Judy Haynes.

The performance was not flawless — a microphone mishap briefly filled the room with a muffled bump, and a prop or two hit the floor when in what seemed genuine, if deftly and professionally recovered, mistakes. But on balance the performance’s multiple merits out-shined the flaws by several orders of magnitude.

The chemistry between Kipper and Logan’s characters – who hit it off immediately in the musical’s narrative – stood out as the actors delivered the most compelling performances of the production while their characters are falling for one another. The two also team up for “I Love a Piano,” with moments that evoke Peanuts’ Linus and Lucy during their less self-conscious moments. The blocking briefly mirrors Lucy’s lounging piano perch as Linus plays, a homage that won’t be lost on viewers of the cartoon special’s annual broadcast.

Both “I Love a Piano” and “Happy Holidays” are performed with the help of another excellent ensemble dance cast, in what has no doubt become a routine pleasure for serial OSTC patrons.

The chemistry between Kipper and Logan’s characters – who hit it off immediately in the musical’s narrative – stood out as the actors delivered the most compelling performances of the production while their characters are falling for one another.

Fans of the movie should not be disappointed when the Haynes sisters sing “Sisters” themselves early on. Wallace and Davis reprise their impersonation of the ladies later in the musical.

One standout treat of show is the performance of  Susann Fletcher as Martha Watson, the long-suffering near-wife experience of the Inn’s owner General Henry Waverly, played by Mark S. Cartier. Of particular note is Fletcher’s surprising athletic cartwheel during “Let Me Sing and I’m Happy,”  which elicited a well-deserved, very excited round of applause and cheers.

OSTC’s production of White Christmas is another crowd-pleasing performance by the company; it’s an excellent choice for fans of movie, fans of Christmas and even fans of snow-free holidays.