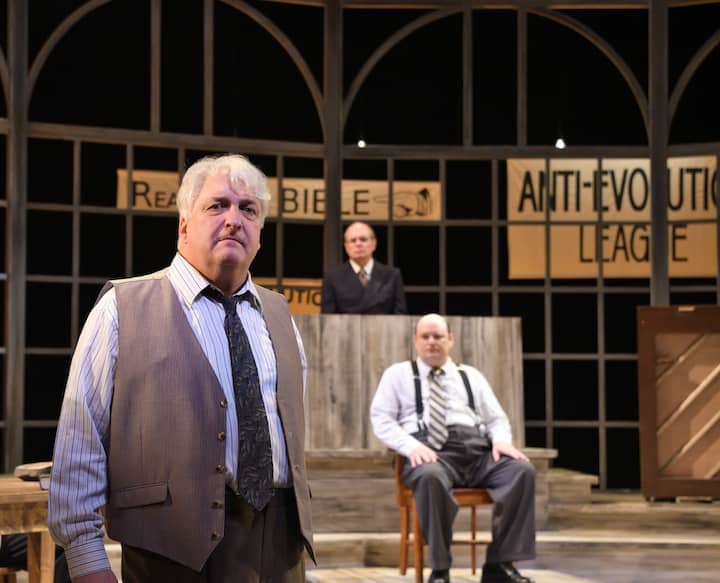 The play takes a creative look at the 1925 trial of Tennessee schoolteacher John Scopes, who challenged state law by teaching Darwin’s theory of evolution, in an engaging exploration of the inherent humanity of ideological opponents.

Historically, Scopes and opponents of the state law, including the American Civil Liberties Union (ACLU), invited the charge in a direct challenge of the law.

In the play and historically, the trial brought national, carnival-atmosphere attention to the struggle between fundamentalist religion, which interpreted the bible strictly, and the modernist religious movement, which adjusted its views to accommodate scientific learning. The opponents are portrayed as close friends in the play, but Smithsonianmag.com reports Darrow was a rival of Bryan, and was eager to oppose him in the trial, although the two were on the same side of the populist Democrat movement defending the poor.

Tom Gleadow of East Providence, playing Drummond, delivers an impassioned, energetic performance as the principled lawyer defending Cates’ right to question the literal details of the bible as a means of deeper understanding of God. His Drummond is deftly torn between the principled fight with his former compatriot and the character’s long friendship with Brady.

That relationship is given some room to breathe with a touching scene between Drummond and Sarah, Brady’s wife, in a warm and heartfelt performance by Karen Gail Kessler, whom some may recognize as OSTC’s director of marketing. The attention paid in the play to the fictional friendship between the two men, strained under the clash of their intellectual positions, seems prescient given the play’s Dallas premiere in 1955. That element of the production is an invitation to consider the logic of political/religious views as well as the humanity of the people expressing them. Kessler’s Sara is a fitting embodiment of collegial disagreement.

Brandon Whitehead of Acushnet, Mass., playing Brady, is a convincingly zealous champion of strict Biblical interpretation as applied to people’s lives. Whitehead’s performance is a fascinating spectacle as the presumptively unassailable ideals that Brady’s beliefs stand on are attacked by Drummond’s logical, yet religiously faithful, arguments.

Historically, the matter was ultimately decided by the Supreme Court in 1968, in Epperson v. Arkansas, striking down bans against teaching evolution under the Establishment Clause of the First Amendment, on the grounds that they were primarily religious. The play ends long before that, with the the trial’s verdict, and a powerful invitation to avoid ideological extremes.

The rest of the ensemble creates a solid sense of the uproar and circus atmosphere in which the fictional and historical court drama took place. Warwick’s Mark Cartier projects the legal authority integral to the story as stern Judge Merle Coffey, and acerbic, wise-cracking reporter J.K. Hornbeck, played by Steven Leibhauser provides strategic comedic relief.

OSTC’s “Inherit the Wind” is no history lesson, but it’s an entertaining reminder that there’s a lot to learn.

The theatre is located at 1245 Jefferson Boulevard, Warwick, RI. Tickets are $34 for preview performances, $34-$49 for all other performances. “Rush” tickets at $25 are available on a limited basis one hour prior to curtain on the day of the performance.