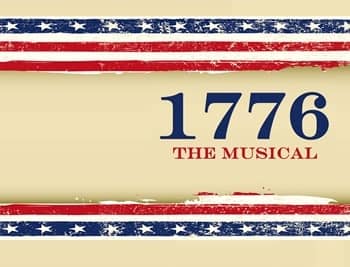 Warwick, RI — Ocean State Theatre Company’s latest ensemble will tell the story of John Adams, Benjamin Franklin, Richard Henry Lee and Thomas Jefferson as they attempt to convince the members of the second Continental Congress to vote for independence by signing the Declaration of Independence.

It’s the summer of 1776, and the nation is ready to declare independence…if only our founding fathers can agree to do it! 1776 follows John Adams, Benjamin Franklin, Richard Henry Lee and Thomas Jefferson as they attempt to convince the members of the second Continental Congress to vote for independence by signing the Declaration of Independence. This fast-paced, high-energy musical puts a human face on the pages of history as we see the men behind the national icons: proud, frightened, uncertain, irritable, sometimes petty, often charming, and ultimately noble figures, determined to do the right thing for a fledgling nation. 1776 is a compelling drama with a striking score by Sherman Edwards and a book written by the legendary craftsman, Peter Stone.

Stage and television actor, Lou Ursone of Stamford, CT, makes his OSTC debut in the role of John Adams. His wife, Abigail, is played by Alison Mahoney, last seen with OSTC as Anna in The King and I. Roger Reed, who won rave reviews for his portrayal of Freddy in OSTC’s My Fair Lady, will play the role of Thomas Jefferson, with Sarah Elizabeth Pothier of Rumford, seen last season as Cinderella in Into the Woods, as his wife, Martha, and Mark S. Cartier of Bridgewater, MA, who last appeared in Breaking Legs, plays Benjamin Franklin. New York actor Ethan Paulini, seen in The Diary of Anne Frank, will portray Richard Henry Lee, and Christopher Swan, last seen in Breaking Legs, will play John Dickinson.

For the full performance schedule, and to purchase tickets, visit www.OceanStateTheatre.org or call (401) 921-6800.