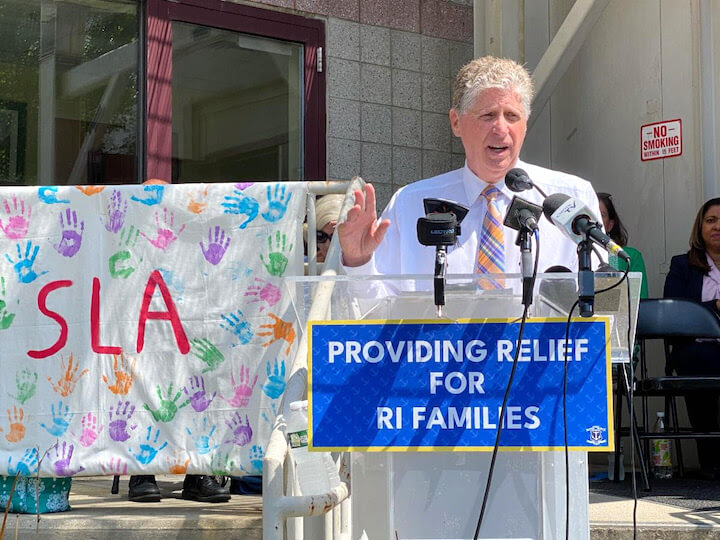 NEWPORT, RI —Gov. Dan McKee announced the new Rhode Island Child Tax Rebate, a state tax rebate of $250 per child for a maximum of three children, on its way to eligible parents automatically.

The program was created in the FY 23 budget signed by the Governor in June.

McKee was joined for the announcement by members of the General Assembly, Newport Mayor Jeanne-Marie Napolitano, Tax Administrator Neena S. Savage, Acting Department of Human Services Director Yvette Mendez and Kathleen Burke, Executive Director of Newport Partnership for Families at an event at the Florence Gray Center in Newport.
“Our Administration is committed to delivering targeted tax relief to Rhode Islanders as we continue to build on our state’s economic momentum,” said McKee. “Supporting parents and their children with Rhode Island’s new Child Tax Rebate is a sensible and critical way to keep our economy growing.”
The program will deliver child tax rebates of $250 per child, up to three children, for Rhode Island residents making up to $100,000 for an individual and $200,000 for joint filers. The program is expected to support nearly 115,000 Rhode Island families across the state.
No application is required. Rebate checks will be automatically issued to all eligible tax filers beginning in October 2022. Any Rhode Island resident who claimed at least one dependent child under the age of 18 (as of December 31, 2021) on their 2021 federal/state personal income tax return, within certain income thresholds, may be eligible. For details and the latest updates on the Child Tax Rebate, visit https://tax.ri.gov/ChildTaxRebate2022. Rhode Islanders will soon be able to track their rebate payment there.
“Fortunately, between federal funds and a one-time surplus, we were able to offer relief to Rhode Islanders in several ways, including this child tax credit that will be helpful to families during challenging times,” said Speaker of the House K. Joseph Shekarchi (D-Dist. 23, Warwick). “Getting this tax credit and other relief into the budget was a collaborative effort on the part of a lot of people who worked hard to come up with ways to give Rhode Islanders some financial relief.”