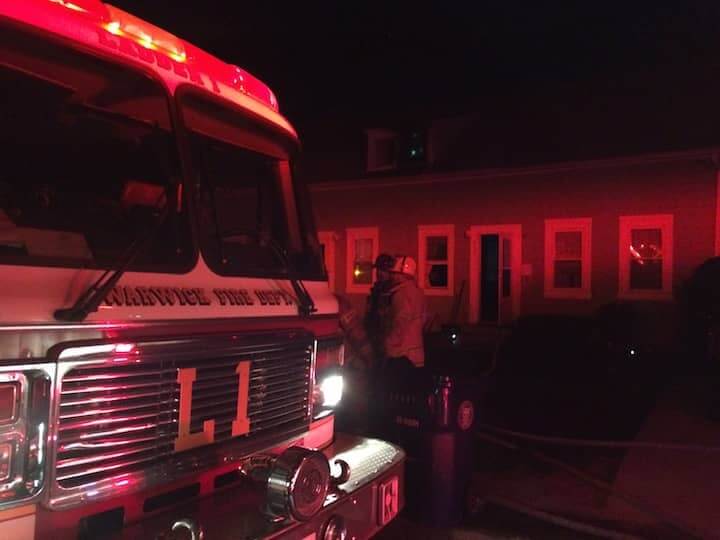 WARWICK, RI —Warwick firefighters extinguished a second-floor bedroom fire at 257 Knight St. Thursday at 9:40 p.m. that displaced a man and a family of three, though there were no injuries.

Battalion Chief Rick Bellavance said the firefighters, who responded with a ladder truck, fire engine and ambulance, found the fire burning in a second floor bedroom in the front of the house, which they were able to put it out in 16 minutes. The fire caused significant smoke and heat damage to the second floor, Bellavance said.

Four people, a family of three in one apartment and a man in a second apartment, were displaced by the fire.

The family, David and Robin Smercaldo and Alyssa Alldredge, were at home when the fire started.

Robin discovered the fire when she smelled smoke coming from Alyssa’s room and opened the door to investigate, finding the room in flames.

Alyssa was in the living room and had just turned on the TV when Robin discovered the fire. David was getting ready for work. Robin said they tried using a fire extinguisher but if didn’t dampen the fire.

“If anything, it made it more angry,” Robin said.

Within about five minutes, they realized they needed to get out of the house.

Robin said it was fortunate that David, a nurse, was on his way to work at the time but hadn’t left, so everyone in the house was active and alert. Had David already left for work, she said, she might have been in her own room with the door closed and may not have discovered the fire as soon as she did.

The family lost some of their clothes, and most of the things in Alyssa’s room, where the fire started, were destroyed. The family also lost one of their cats, Brady, named after Patriots quarterback Tom Brady. They had let their renter’s insurance lapse while paying to keep their cars on the road, Robin said.

The family spent the night with a neighbor. Robin said they’ll begin putting themselves back on their feet in the morning, but any help doing that would be appreciated. At the moment, there is no fundraising fund or Gofundme.com page set up for the family.