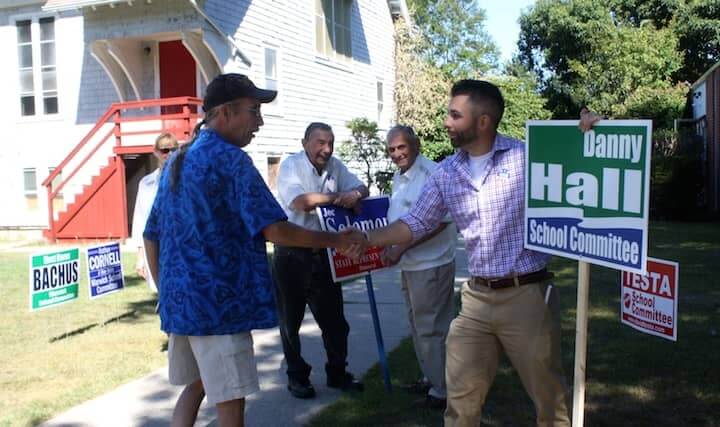 WARWICK, RI — Danny Hall, 34 a resident of Lewiston Street, has lived in Warwick his whole life, is running for School Committee this year to bring accountability and transparency to the board.

Hall’s primary voter support came in a close fourth, a near-tie with fellow candidate Dean Johnson at 1,735 to the latter’s 1,746. Prospective voters can continue reading about Hall’s candidacy at his Facebook page.  He last ran for office during a 2012 bid for Warwick City Council against Councilman Edward Ladouceur, who now endorses his former rival, according to the Warwick Beacon.

Warwick Post has presented each School Committee candidate with the same series of questions for voters’ benefit in the days leading up to the election. Here are Hall’s answers:

Why are you running for School Committee – What do you feel you can bring to the board that’s lacking there now?

There are a few reasons I am running for school committee but mostly to attempt to bring some composure, transparency, and accountability back to the table. I believe I can bring some fresh, new ideas and perhaps some compromise that has certainly been lacking for the past few years.

What are your thoughts on the contract dispute between the teacher’s union and the district?

I believe the contract dispute between the teachers union and the district has been going on for far too long. The language in the contract needs to be fair and equitable for both sides and at this point in time this dispute isn’t benefitting either side. It truly comes down to the teachers needing a fair contract. When that happens all students, faculty and administration will benefit from it.

What is your opinion on the long wait voters endured to view the Ragosta Report? Would you change anything about the School Committee’s practices regarding the body’s apparent tendency to err away from transparency?

The Rogasta Report included sensitive material related to children in the school district.

The report also included the information of personnel. Both of those areas have laws covering the release of information. If the school district followed legal advice, I would not feel I am in the position to speak against it. I will say that the safety of every child in our district is paramount.

If I were on the school committee I would have pushed and insisted on more transparency regarding the Rogasta Report. Warwick parents send their children off to school every morning, trusting that they will be safe in their absence. I feel as though the school department essentially put these children in harms way by covering for that particular faculty member. Although these administrators are no longer around, this incident will never be forgotten by parents and students alike. At this point, it is the job of the administration to earn that trust back and to prove to the parents that they have the best interest of the student at heart. A repeat of this incident can never happen again and parents should be able to send their children to school with the confidence that it wont.

After reading the Ragosta Report: https://warwickpost.com/ragosta-report-school-administrators-ignored-dismissed-allegations-againsted-atoyan/ What lessons do you see the School District should have learned about the power entrusted to its administrators and the ability of concerned parents and staffers to safely speak out?

I believe that the lesson the school district has learned is to not ignore issues such as child safety anymore. This issue was “swept under the rug” so to speak and hidden from the public for far too long, covering for the wrong person.

The children were the victims here and administration at the time hid the predator as though he were the victim. It was wrong, unjust and completely avoidable. With more transparency in the system and accountability for administrators and staff, our children can truly be safe. As parents we have to be able to trust the school system we send our children to daily, although this incident made it hard, with some changes, it is not impossible to earn that trust back.

What is your opinion of how school consolidation has been handled thus far? What would you do to improve the process?

I believe that consolidation thus far, although necessary, has been troublesome for all involved. Consolidation is necessary to the city of Warwick due to the declining number in students in the city.

The questions that arise in my mind are: If the elementary consolidation begins, have we considered the right schools to consolidate? Are the bus routes timely and efficient? Are the walkers safe? Are the children going to have a safe and productive learning environment without the distractions that seem to be making its way through the secondary consolidation right now (i.e. small classrooms with a large amount of students, falling ceiling tiles, equipment failure etc.) I feel as though we have not addressed all concerns from the students, parents and faculty.

The primary consolidation at this point in time would only add to the large list of concerns that everyone has, including myself.

Please share your thoughts on any other pressing issues you’d like to address as part of your campaign.

One major concern that I, and many Warwick citizens, have is the infrastructure of our current school buildings. The money purposed for the schools isn’t nearly enough to complete all the necessary repairs to the buildings. We have a half a million-dollar budget for maintenance in the buildings yearly, in writing it seems like a good amount of money but divided up between roughly 20 buildings, that leaves the minimum to repair necessary infrastructure in our schools.  We are now in the predicament where we have to borrow a large sum of money to repair these buildings, which in turn leave us, the citizens of Warwick, to pay back a large amount of interest. We should have been investing our money accordingly all along, and action should have been taken 10-15 years ago instead of posing all of this on the community at once. It is overwhelming and naturally and rightfully causes the community to be resistant to consolidation and changes.