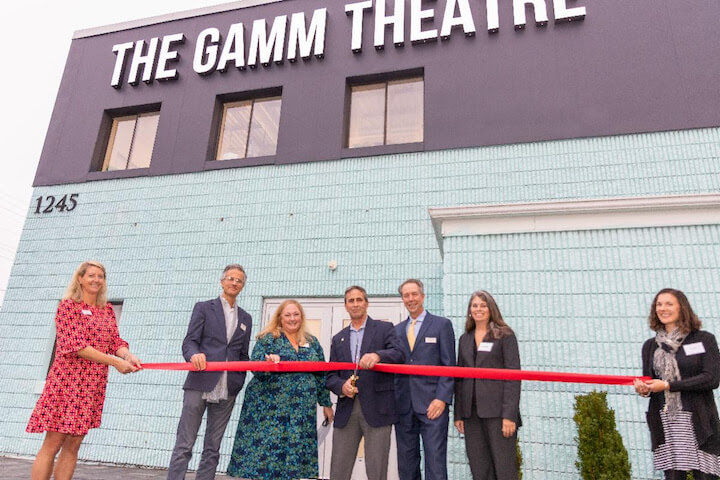 The evening’s festivities began with a ribbon cutting for the courtyard — the most visible among a slate of ongoing building enhancements.

Now in its fifth year at 1245 Jefferson Boulevard in Warwick and 38th season, The Gamm has been undergoing facility renovations to improve the function and elevate the purpose of its performance and programming spaces.
With partial funding from a Rhode Island State Cultural Facilities Grant administered by the Rhode Island State Council on the Arts (RISCA) and matching funds from patrons, projects are already improving production systems and education spaces, and enhancing the overall theater experience. The latter includes the creation of a beautiful courtyard at the theater’s entrance designed by Elena Pascarella of Landscape Elements and installed by 4 Site Lawn and Landscaping, both of Warwick.
“The Gamm is also grateful to the City of Warwick for a donation of four large planters,” the  theater stated in an announcement about the changes and milestones.
“These renovation projects will help our facility better reflect the high quality of The Gamm’s artistic programming, as well as the scope and innovation of our education programs,” said Managing Director Amy Gravell. “We are very grateful to both RISCA and our generous, loyal patrons for supporting projects that will promote inclusivity and help us become the vibrant community center and regional arts destination that we envisioned when we moved to the center of the state.”
Board President Daniel Marwil honored individuals who have recently completed their service on the board. They include:
Marwil thanked Board Treasurer Frederick Reinhardt, president and chief executive officer of Greenwood Credit Union, who completed his service on the executive committee and remains on the board of directors. He also welcomed two members of the board of directors to officer positions: Miriam Weizenbaum, chief of the Civil Division for the State Attorney General’s Office, as vice president and David Kellogg, president of Kellogg Associates, as treasurer. All three are residents of Providence, R.I.
Tony Estrella, who is celebrating his 20th season as The Gamm’s artistic director, thanked the cross section of trustees and volunteers who ensure Rhode Island’s not-for-profit sector’s vitality, saying, “You are safeguarding a proud, vital tradition and without you our stages would go dark, concert halls be eerily quiet, after-school programs be shuttered, and the soul of the community be extinguished. You demand that we value what is often deemed useless, elitist, a luxury and non-essential,” Estrella said. “Your tireless efforts and incredible generosity free us to compete on that uneven playing field, to prove our absolute essential-ness and necessity.”